After a few false starts this season, my buddy John and I finally got to race together. The Hardcore Mudd Run, just a few minutes from the main campus of Penn State, was our destination. Tussey Mountain does not look big from the road. But like a lot of Pennsylvania mountain terrain, it soon proved to be the main obstacle of the event. Think Palmerton but perhaps a third of the elevation. Just as steep with one bit that Blue Mountain, PA does not have – a wicked half-mile or more boulder field. This was very technical terrain in all directions and I loved it. 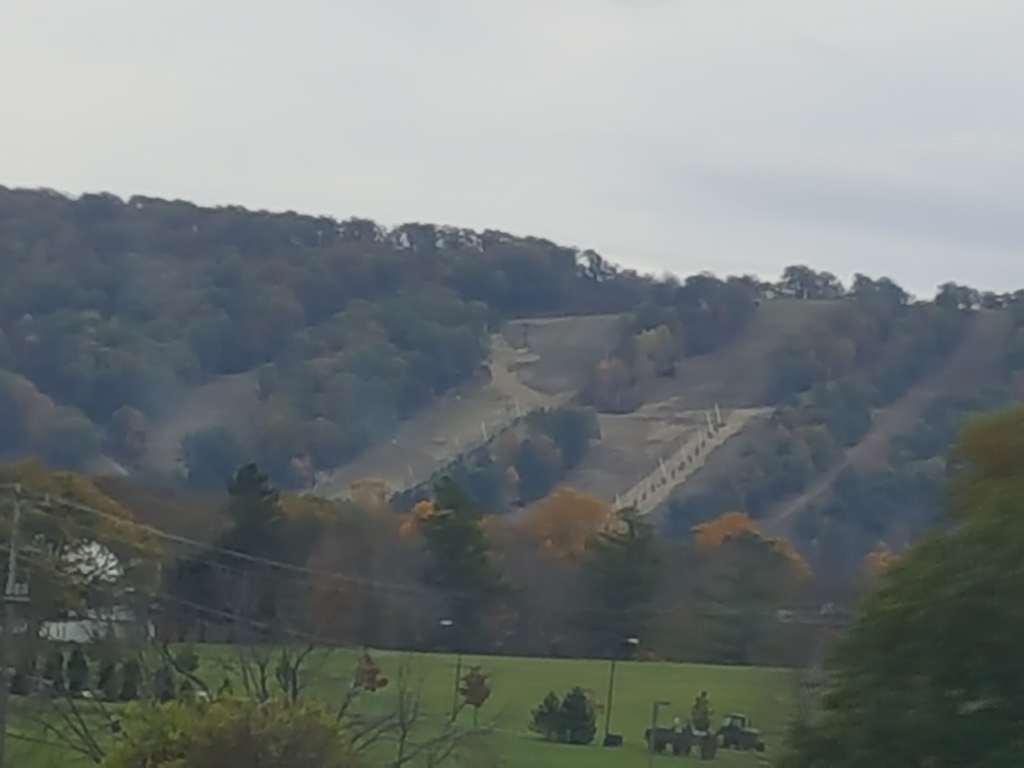 Which is more than can be said for John. He just came off a month of disability recovering from kidney stones. So his goal was just to finish the race. That barely happened. And that was partially my fault.

About three days before the race we got an email from the director that the start times for the elites and the first wave combined and moved to 0800. When we arrived at 0700 it was obvious why. It was still pitch black. But otherwise, the weather was perfect. Clear, 50-degrees, just a little breeze.

Parking was right on site and so we only had a short 50-yard walk to the festival area and starting line. So we hung out, warmed up, and met a few people. I told John he would soon meet my former Obstaclemaniac colleague Logan Nagle. That didn’t ring a bell. But then I told him Logan was one of the three guys to finish last season’s “The Selection”. We loved that show and still talk about it all the time when we train together. Logan also happens to be a member of the Hardcore Mudd Run elite team. This was his home turf and he expected a good showing as he prepped for WTM coming up. 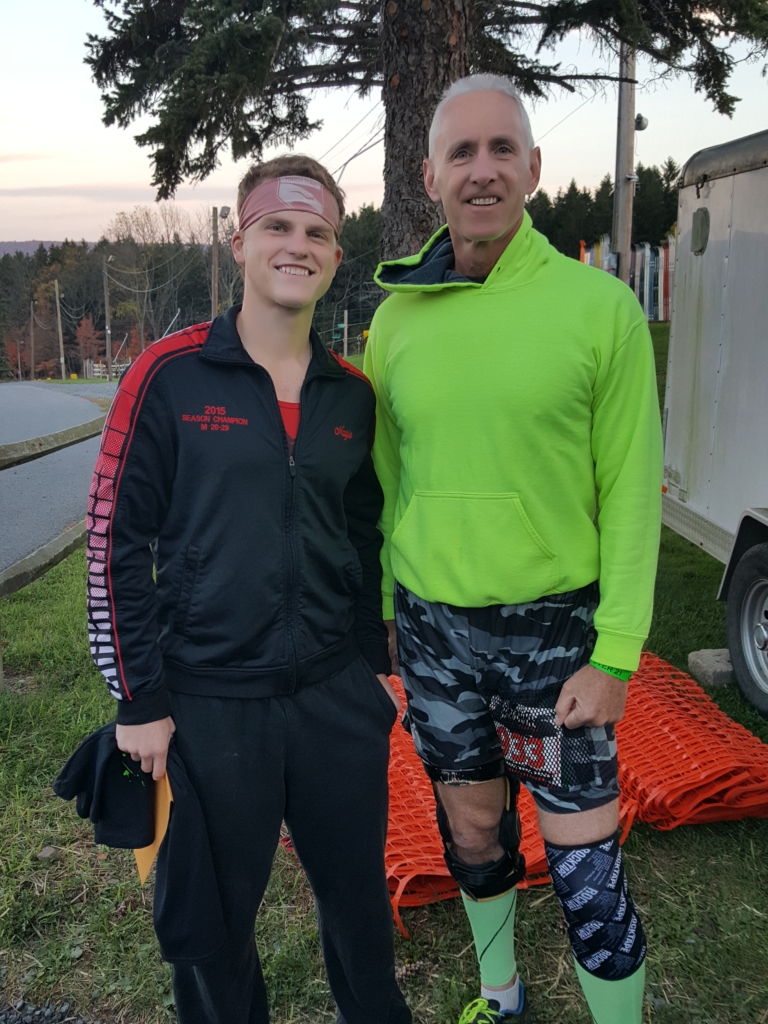 Logan Nagle – HMR pro and finisher of “The Selection”

Registration was a snap. Indoor restrooms at the lodge were clean and convenient. By start time we were ready to go. Or so I thought. I was ready for the six-mile race. The web pocket of my X-Race shorts was well stocked with fuel. The course map indicated three water stations so we did not worry about carrying any. That ended up being an issue for John later on as there was only one water stop all the way at the top of the mountain. 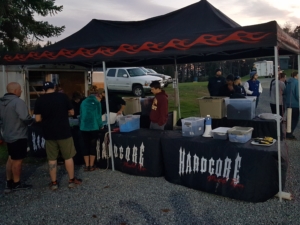 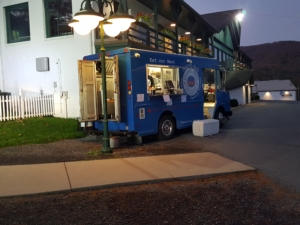 The first obstacle just out of the gate was an over-under fire evasion. Then it was straight up about halfway before turning into the woods for a long bushwhack. This was not single track. There was no trail. The course was well marked with orange paint splots on rocks, orange tags on trees, and occasionally some red and white arrows on black signs. Our course starter Jim made sure we understood this before taking off. Don’t follow any other color out there. 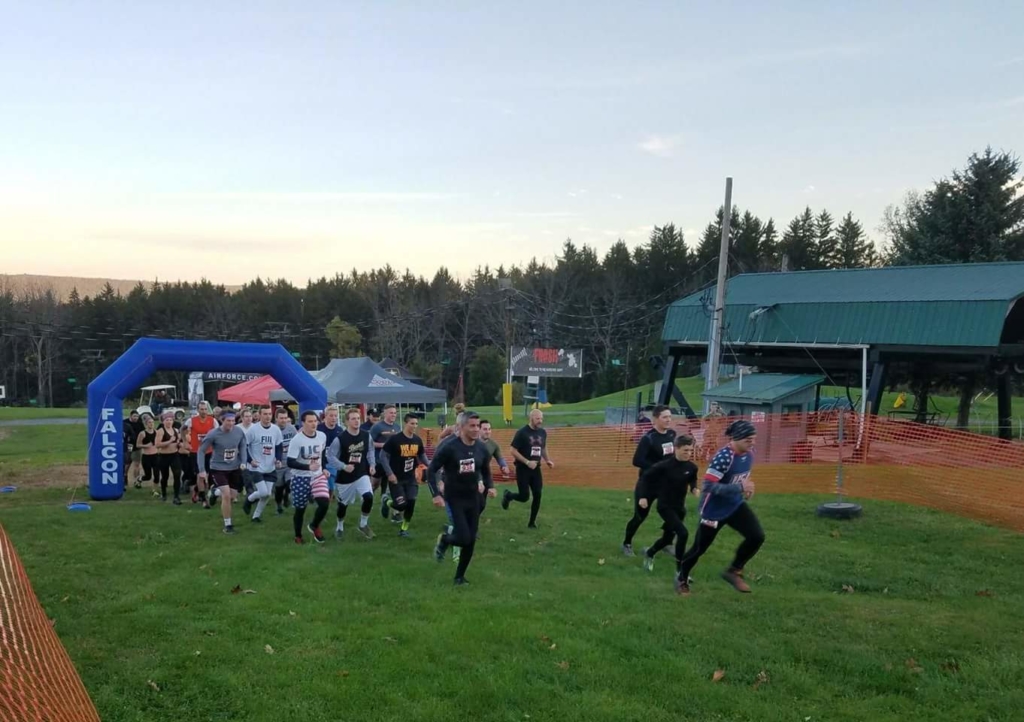 After a few switchbacks we emerged from the woods back onto the slope for another steep ascent. By this time John’s legs were jelly and we were maybe only a mile into the race. So we rested a bit, then headed back into the woods on the south face of the mountain for more bushwhacking and bouldering. About a half mile into this I lost track of the orange markers. To my left, straight up, I could see the top of the mountain and the ski lift turnbuckle. I also saw trail markers. So up we went. At the top we were met by the race director Gideon. He asked us how we got there. “I lost the orange markers so I followed these pink markers,” I said.

“I have no idea what you’re talking about,” he said. “So just pick up the trail over there.”

John told me he was going to report me to the Boy Scouts and take away my Orienteering merit badge. “Some Eagle Scout you turned out to be,” he said. “I’m not following you anymore.”

The trail picked up at the one and only water station. I bypassed it but told John to take a drink. Then we headed back into the boulder fields. Finally we switched back and found ourselves at the first manmade obstacle. A set of three walls at twelve, ten, and eight feet faced us. The first wall had a rope. The other two, you were on your own. John’s legs weren’t getting any better so he gave it his best on the eight-footer and made it over.

We made our first descent which took us back to the base of the mountain. Here we face one of the nastiest obstacles I have ever done – Entrapment. The mud pit had a chain link fence nailed over it. The clearance was minimal. You had no choice but to face plant into the mud and claw your way through two of these monsters. John felt claustrophobic. I just felt smothered. This really bothered the three people behind us. They had to emerge early in a panic. I thought it was a great obstacle. 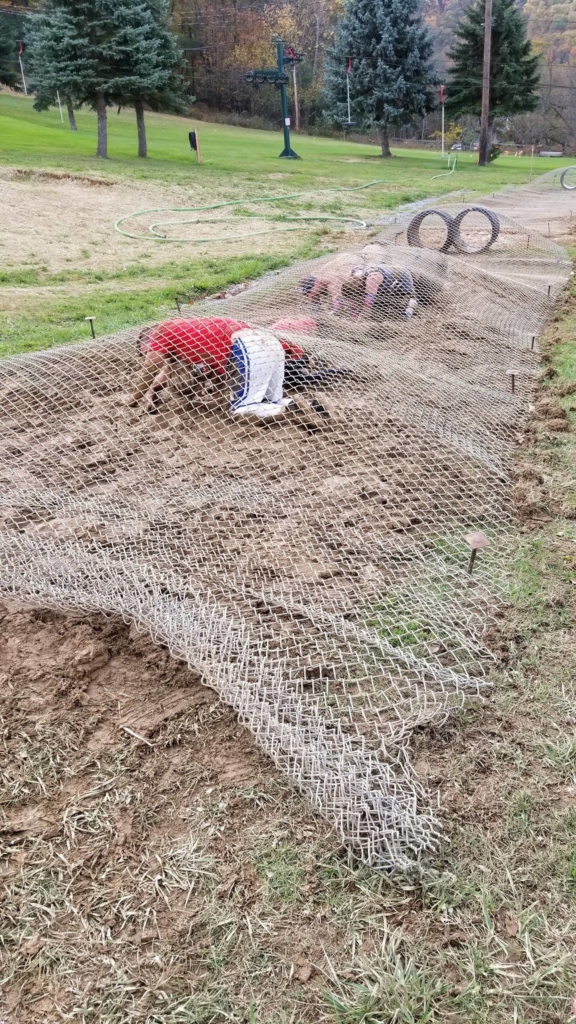 With the cooling mud stuck to every square inch of our bodies, we headed back up the slope. Off to our right, we could see the next obstacle, the sandbag carry. But first, we had to get over a very loose cargo net. I waited for a few people in front of me to clear then I scrambled right up, flipped over the top, and zipped down. The volunteer freaked out thinking I had slipped and needed a medic. Nope. All good. But then I heard John call out. He was down.

His foot arch cramped up bad. So this Eagle Scout went to work and got his buddy functional again. He was able to move on. We descended to the sandbag pickup, grabbed our loads, and started the next ascent.

The bags were pretty light and the distance was not too far so we got through that OK. We descended again to the base where we crawled through two corrugated tubes separated by a water ditch halfway. It was here that the official course map indicated a second water station. Nope. We stayed hydrated with saliva produced by Sport Beans. That worked well for me as I train that way. But by the time we got to the top of the mountain again, John had cramped up and was dehydrated. Fortunately, the one and only water stop were right there. So we detoured after I got his legs working again and got him a drink. I joined him this time.

After a descent about halfway down a slope, we entered the woods again with a sharp right. There we found a set of hanging doors and poles that we had to navigate sloping uphill. They were tough. The volunteer told us that the three lead elite runners each soloed this one. Kudos men.

We then single-tracked over to the next obstacle which was a massive tire with a rope attached. Individually or as a team, you had to get the tire up the slope, then back down. This beast was a few hundred pounds. We dragged it together. Stupid me didn’t think to roll it until a day later. I dragged it back downhill alone as that was very easy.

At this point, John’s legs were shot. As in paralyzed. He says he had never felt anything like this before in his life. So once again I got him moving and realized what had happened to him. You’ll recall last week’s MRG piece from Wesley Kerr on kidney failure. In similar fashion, John shut down because his electrolyte balance was completely out of whack. After a month-long battle with kidney stones and meds that basically flushed his system of all fluids and their contents, he then went to conquer the HMR course without replenishing properly. No wonder he hit the wall on the first ascent. When we got home that night I had him drink a gallon of Pedialyte. He felt fine after that and, as he said, “slept like a baby” that night.

At the bottom of the mountain, we had a long, muddy, barbed wire crawl. Added to the fun were a few snow-making machines blowing freezing cold mist at us. This was the only other “water” on the course besides the one station at the top. I remembered a new crawl technique that I saw Ryan Atkins use earlier in the summer. Basically, it was a sideways spider-like crawl. No rolling. Not a forward military crawl. But very efficient and fast. So we got through that, made one last short ascent, turned the corner and headed for the finish line.

There were just two five-foot hurdles left. We did those, then on John’s insistence, ran the last fifty yards to the finish line. He said he would finish this race no matter what and he did. I told him if it was me, I would have taken the DNF. We got our medals, a cup of water, and a banana. 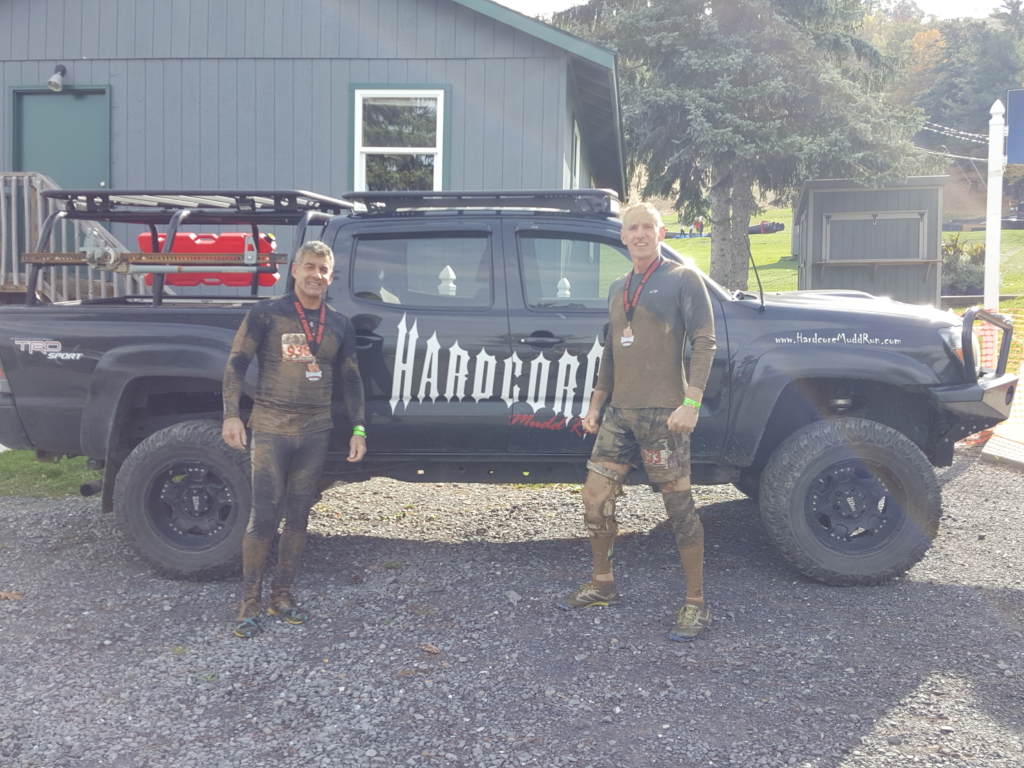 We cleaned up in the lodge restroom a bit, took a few celebration pictures, and headed out. We were a bit surprised that when we got off the mountain around 11 am, they were already tearing down the infrastructure. I was told earlier in the morning by another racer who had done the first HMRs a few years ago that there were thousands of racers. Last year he said there was maybe 150. Today seemed sparse too by my 11 am observation. The place was vacant at the bottom. We could still see plenty of racers on the mountain thankfully. I hope this will not become another case of Don’t Sleep on Local Events!

If Hardcore Mudd Run survives, (and hey all you Penn State students and alumni, how about you show up to support your local mud run just ten minutes from campus! We drove four hours!), then I give it a 5 for 5 rating. I returned home with a cool medal, t-shirt, and First Aid merit badge. 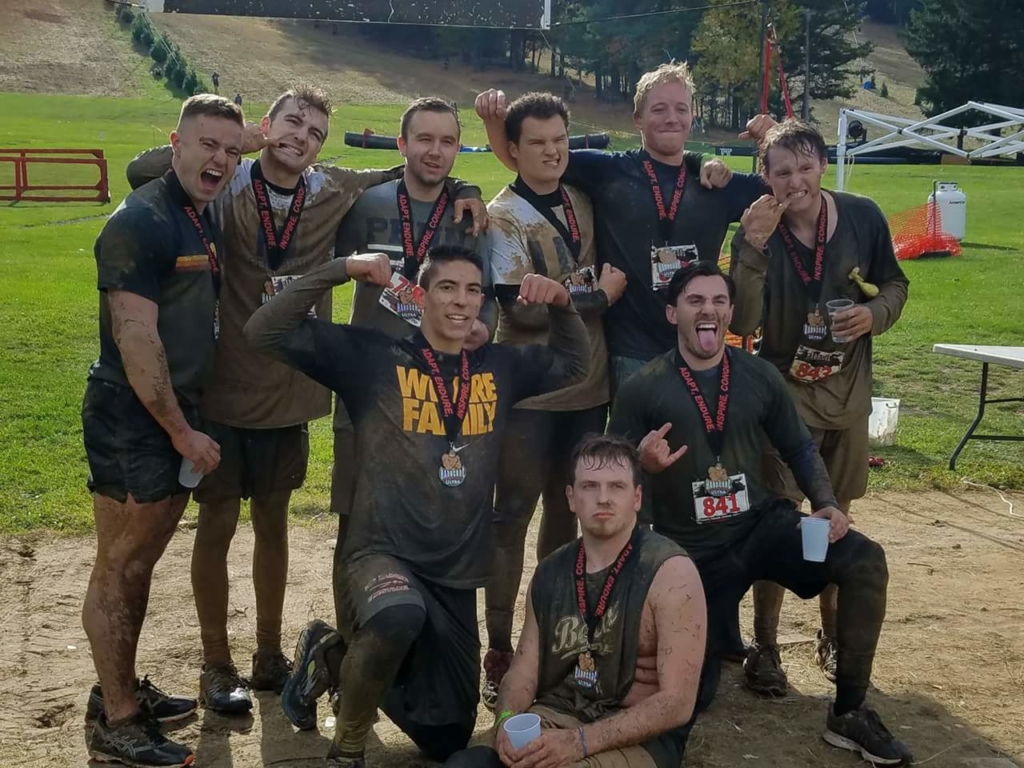 Have you done an Hardcore Mudd Run?

Leave your own Hardcore Mudd Run review and feedback...