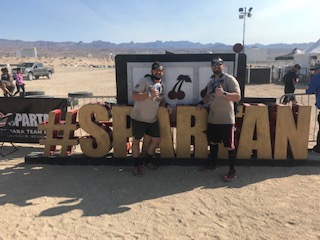 It is really tough to follow a Spartan Kids World Championship and the first ever Elite Para Heat, but there was a race day on Sunday with thousands of people taking on the Super course. This was one of the few weekends where Spartan flipped the distances and ran the Sprint on Saturday and the Super on Sunday. Originally the thought was more people would run the Sprint on a Saturday with a full day to recover before work on Monday, but this weekend they wanted the kids and the para athletes to be front and center on Saturday. Oddly enough, there were more racers in Laughlin on Sunday than there were on Saturday. With several people chasing their Trifectas, the Super felt more crowded than the Sprint.

Laughlin Nevada is situated on the banks of the Colorado River and about 90 miles south of Las Vegas. Directly over the river was Arizona and a different time zone. This was very confusing upon first arriving as several phones auto updated to the Arizona time zone and you had to manually set it back to the correct time. I was instructed by a staff member who happened to be running an event at my hotel but could not find any information in the emails or the event page for the race. When Spartan ran their event in Littlefield Arizona earlier in the year, they made sure to let people know which time zone they would be operating in as that race was also on a border. The venue itself was very small and several booths you have come to know over the Spartan season were missing. The course was a mix of loose and packed sand but was relatively flat and easy to navigate. Sunday was much windier than Saturday and the wind threw sand all over the place. On the bright side, the venue was close enough to free casino hotel parking that you could save $10 and walk from the Tropicana parking deck. There was not a whole lot of change from Saturday to Sunday with the course outside of more running and a few more hills. The Super was posted at 7.85 miles, making it one of the shortest Super courses of the year. The biggest challenge for racers was again the spear throw, with the wind wreaking havoc on even the best throws. I was 15 for 15 on the spear throw coming into today and a gust of wind caused my first miss of the year. The rest of the course could be navigated relatively burpee free. Laughlin was missing the Twister that normally gives people problems and the multi rig was a mix of rope, rings, and the long bar. Normally there is a baseball grip that claims a lot of racers in the multi rig, but they did not change the layout from the Sprint the day before. The rolling mud pits and dunk wall were very disappointing on Sunday. Due to the dry desert climate, much of the water had evaporated and they did not refill the pits for Sunday. You could step over the first pit without getting wet, the second pit could have also been easily avoided, and the dunk wall was so low that you had to lay on your chest on the ground to get under it. Spartan also used an inflatable wall rather than their normal wood for the dunk wall. The biggest disappointment of all was that the camera man had moved from the dunk wall to the barbed wire crawl between the mud pits and we did not get our #DunkwallWednesday pictures. Of the 15 races I have done this season, Laughlin was by far the shortest and easiest course. Sunday felt flat compared to Saturday. There was so much excitement surrounding the Kids World Championships and the Elite Para Athlete Heat that every seemed almost burnt out. Racers were braving the wind in the morning. They hid under any tent they could find and did not stick around very long after their heat due to the weather. The biggest draw in the festival area was the GRIT Freedom chair booth, but even they felt more successful the day prior. There were more people on Sunday than Saturday, but the race had an entirely different feel. Everyone wanted to get back home to get ready for work or get back to Las Vegas to take their flights home. The para athletes and kids deserved the spotlight on Saturday, but Sunday felt very lacking and almost empty after so much happening the first day. As a standalone event, the Super on Sunday was not one of the better events put on by Spartan this year. The weekend as a whole was an amazing experience, but Sunday just felt like an added chore compared to Saturday. The Super Sunday in Laughlin was a 3.5 out of 5. This is not necessarily a knock against Spartan or to detract from this event, but they have created such a high standard across their races that Sunday did not quite live up to that standard. The course did not vary much from Saturday to Sunday outside of the extra running, they were missing key obstacles that we have all come to know and love, the water situation for rolling mud and the dunk wall was very disappointing, especially for being early in the day on Sunday, and the lack of communication about the time zones led to some confusion. If you simply trusted that your phone was going to display the correct time, you may have been very late for your heat. Spartan missed an opportunity to make the race day experience even easier by ensuring everyone was on the same page. The festival area was just as barren as the desert course, but they did have a Sam Adams lager and spiked sparkling water for your finisher’s drink which is a step up from the Coors Light we have been getting. Spartan Laughlin Weekend was an amazing experience, but most of that happened on Saturday instead of Sunday.