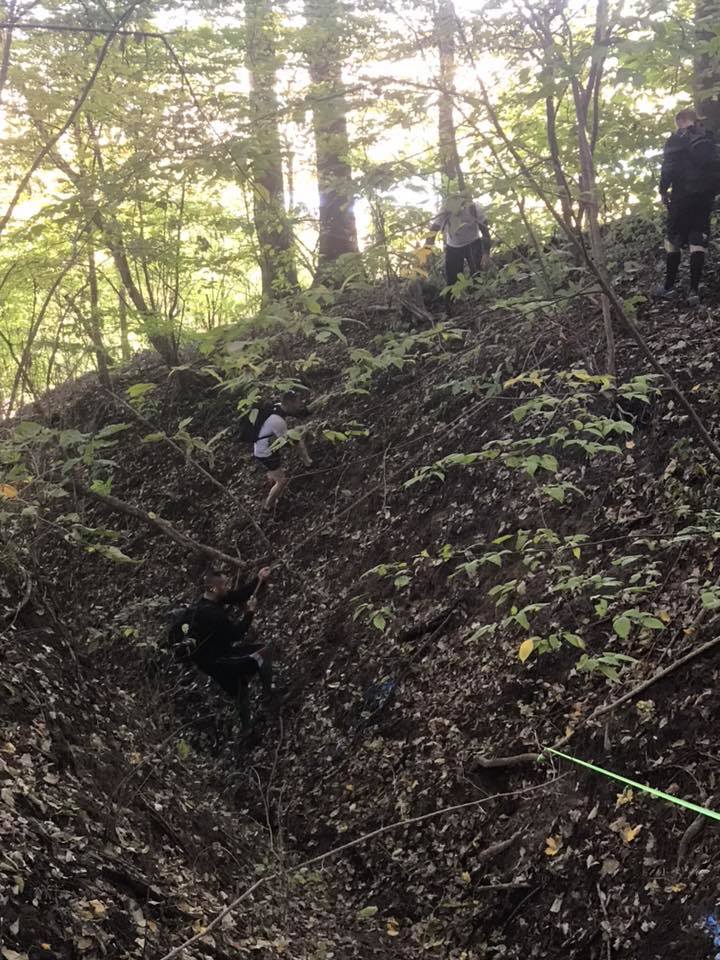 A view of some of the “fun” terrain from GBC KC. This site will also be the site of Mark Ballas' new trail race series Wicked Trail Racing currently scheduled for March 23, 2019.

Mark Ballas brought his Green Beret Challenge (GBC) Commando course to the Kansas City area for 8+ miles of building better humans.  The GBC Commando course requires athletes to team up in a group of four (all male, all female or 2/2 coed are the three categories) and traverse the entire course together while completing challenges/obstacles.  I joined the “party” with several of my Strength & Speed teammates and here is how it went:

Parking was quick and easy costing $10, a reasonable amount.  The nature of the event means this is much smaller than a normal OCR so it doesn’t typically support more than around 40 teams of four.  With people already organized as teams, it made carpooling easier and more likely.  The check-in was the fastest check in ever with only one athlete required to stop by the booth to check in for the team. Rucksack carry about halfway through the event.

GBC had some great use of the terrain at Big River Ranch in Lexington, MO (the race venue).  Several of the athletes who had done Warrior Dash in this location before commented they had never seen this part of the venue.  The course took athletes through a mix of single track trail, wider improved trails, down ravines, scrambling up small rock faces and through a stream that was colder than many ice obstacles I have gone through at other series.  It really was a great use of the terrain providing a mix of everything, something I have experienced at all three GBC events I have raced.  (This site will also be the site of Mark Ballas' new trail race series Wicked Trail Racing currently scheduled for March 23, 2019.) Jake Diehl finishing up the final event of the race.

I hope you like carries.  GBC’s concept is pulled from Special Forces Assessment and Selection (SFAS) (if you want to know more about SFAS check out the Discovery Channel documentary Two Weeks in Hell or Dick Couch’s book “Chosen Soldier”).  Each obstacle or challenge requires a lot of grit and often some creative thinking.  At GBC KC, athletes were required to carry a Sandman (a cloth stretcher with 150+ lbs. sand dummy), a railroad tie with poles (that required lashing/tying), weighted rucksacks, yoke carry, Skedco drag (sled style stretcher drag), oversized sandbag snake and farmers carry.  Each carry felt like it was about a ½ mile or longer.  Between each carry/drag, there was trail running with some obstacles like barbed wire crawl, tunnel crawl and rope ascent/descent on uneven terrain. Close up view of the “Sandman”.

Each finisher got a GBC finisher medal and GBC Commando t-shirt for completing the event.  I liked that they gave out the finisher shirts at the end after completing the event.  The 1st place team in each category were rewarded with a large dog tag style wooden plaque for each teammate.  For those that wanted something extra, they had a good merchandise booth including patches, stickers, a fan favorite GBC branded MudGear socks, shirts, kids shirts and more.  I saw many athletes picking up the highly sought after F**K BALLAS patches and shirts expressing their thoughts mid-event while pushing their personal limits.

Only improve I had here was I would like to see the 2nd and 3rd place team’s announced/recognized at the awards ceremony.  With an event that’s on the smaller side, I wouldn’t expect prizes but recognition for those athletes is always appreciated.

Where GBC really made their mark was the overall feel.  The small nature of the event made post-race seem like just a bunch of old friends sitting around the fire having a couple of beers.  With no corporate feel and the event drawing lots of local racers from KCOCR, it really gave it an atmosphere that is almost impossible to find anywhere else.  They didn’t have vendor booths but the venue was selling food, they did have fires to keep warm, showers to rinse off and music playing.  Easily one of my favorite post-race festivals and overall feel. GBC is a great event.  Usually, when I talk to people after the finish they say “I’m never doing that again, that was too hard” or “That was awesome, sign me up for the next one.”  However, I know I’ve said the same thing after certain endurance events only to find my feet on the start line the following year.  Either way, if you don’t have a GBC in your schedule it is time to add one.  The carries drags and weights are the same for all teams regardless of gender or age.  For those that carry more muscle and are tired of being beaten by their wiry ninja friends, I would drag some of them out to this event and level the playing field.

While I loved it, I’ll say if you aren’t a fan of heavy carries, teamwork or don’t want a couple hour taste of SFAS (an event that lasts several weeks), you probably won’t like GBC.  I’m going to give it 5/5 stars based off the atmosphere, uniqueness, use of terrain and overall fun of the event.

Have you done an Green Beret Challenge?

Leave your own Green Beret Challenge review and feedback...