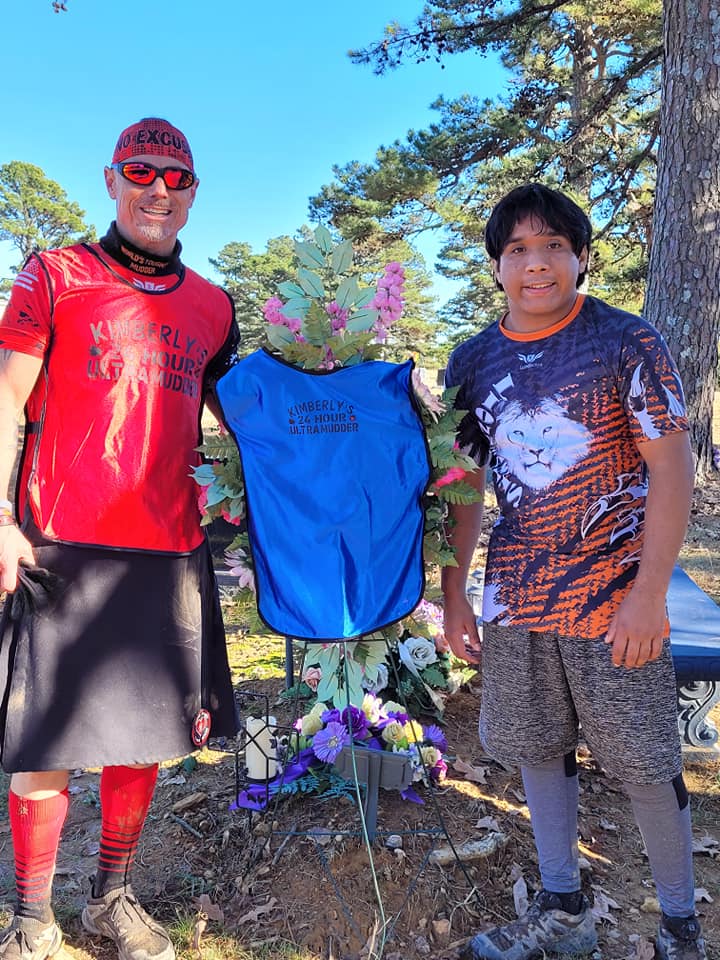 Joey McGlamory and Luccketta at the grave of Kimberly approximately 10 feet from the course. 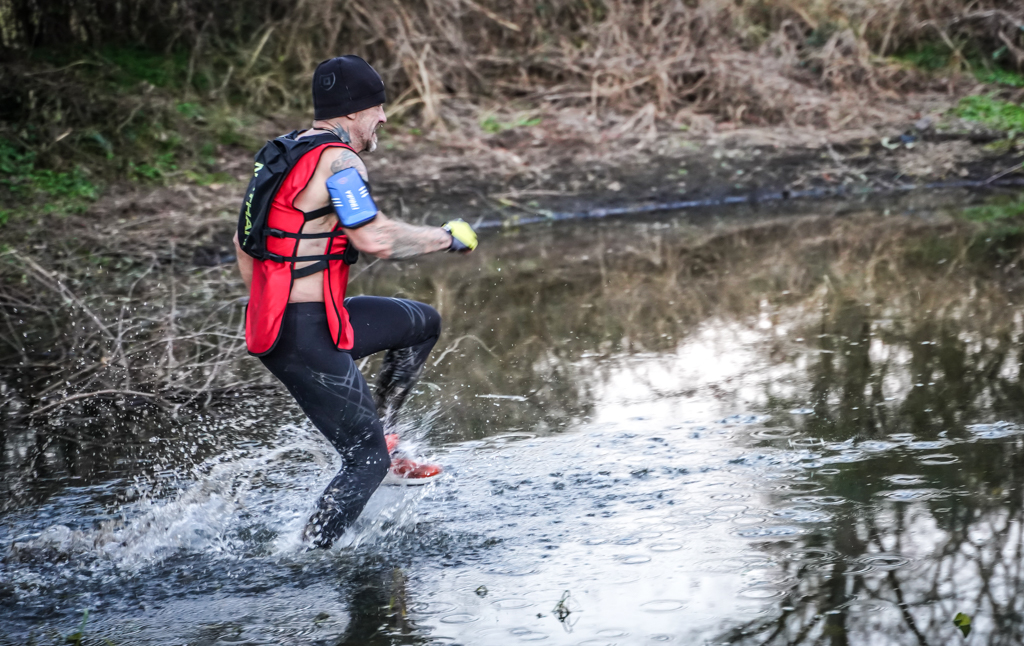 Running across the water pit.

Course: The course ran through Charles property and on part of the adjacent road.  Charles and some of his friends managed to build a complete five mile course over his property.  The most memorable part of the course actually ran by the adjacent cemetery where Kimberly is buried, allowing runners to say hi or pay their respects on every lap. 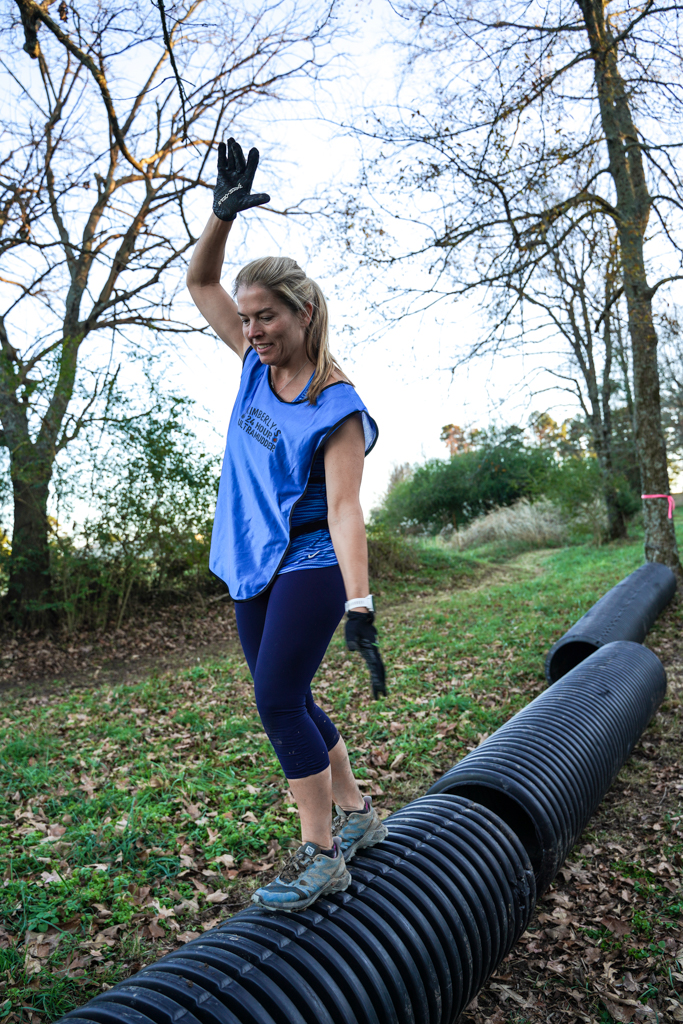 One of the pit crew (as denoted by the blue bib) trying out the pipe balance obstacle.

One of the unique parts of the route involved running loops through the goat pen.  After climbing over a slant wall the route spiraled through almost every inch of the pen.  The goats stayed out of our way but seemed to be slightly confused why athletes were running in circles through their home. 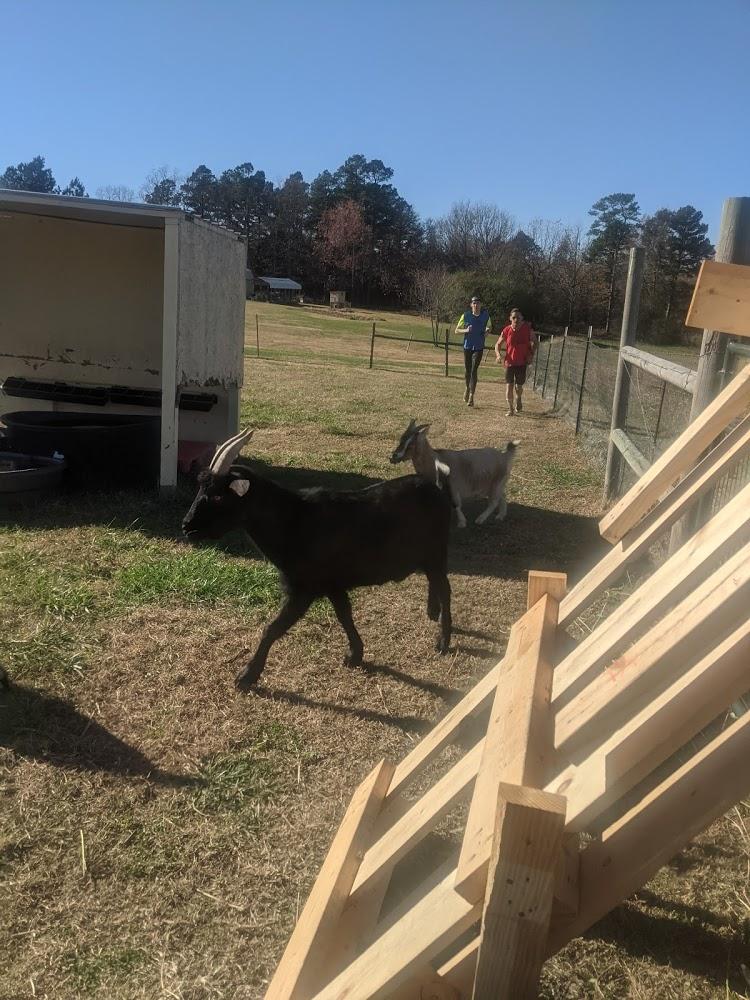 Terrain:  The course had a ton of switchbacks, which mentally made it challenging because sometimes a point looks so close but you proceeded to snake through the field seemingly forever before reaching the next obstacle.  The lower field, which made up 75% of the course, had a ton of marshy crossings. 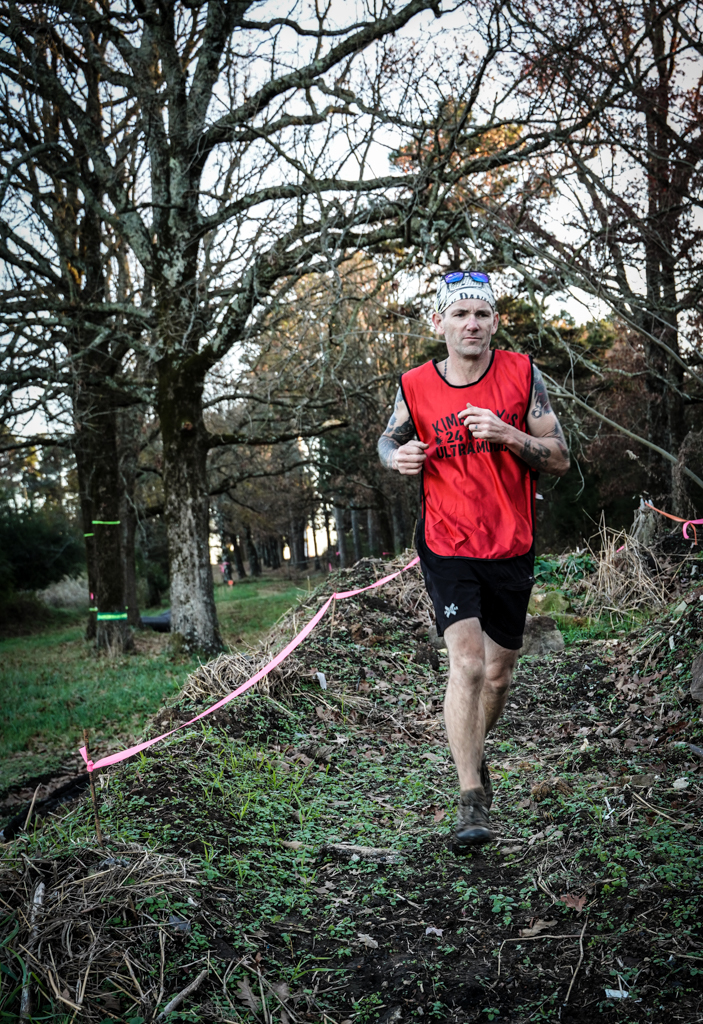 Charles “Tank” Lukancich logging miles in remembrance of his wife.

I think my feet were actually wetter here then at World’s Toughest Mudder (WTM).  At WTM your feet get wet on water obstacles but there aren’t many points on course for your feet to get wet between obstacles.  On the lower field it felt like every 100m my feet were getting wet again with chilly water with temperatures dropping to low 30s in the evening. The two hardest obstacles were the Tyrolean traverse and stump jump.  The Tyrolean traverse was one of the longest I have seen (I only recall Shale Hill’s being longer) and made using ratchet straps making it a little tricky since you had to make sure you grabbed it without twisting the strap. Author trying not to mess up on a stump jump tutorial he filmed for Conquer The Gauntlet Pro Team's #TechniqueTuesday Facebook page. Did he make all six jumps? Or will the video end up on their #FailFriday post?

The stump jump (named “Nut Crusher”) obstacle was actually pretty hard.  The stumps were pretty far apart and really required having confidence to make it across each.  The first time I stood on the first stop by comment out loud was “Are you serious about this?”  However, after regaining my composure I was able to make the leaps, only having to redo jumps twice over the course of the event. Pit crews and a couple of athletes rest by the fire in the middle of the race.

Atmosphere:  The atmosphere was very memorable.  In the pit area there was a huge bonfire with friends, family and pit crew sitting around relaxing.  People were relaxing, having some beers, drinking hot cocoa and overall having a great time.  Charles went above and beyond giving this a bigger event feel.  Athletes had red colored race bibs with the event name, pit crew had similar blue colored bibs, everyone received a magnet with the event name and the top five received trophies. Four of the top five athletes holding their trophies.

What is fun and interesting about small events is the lack of standardization.  It’s always interesting to go into an event blind with no idea of the obstacles.  The creator of events like this can literally do anything they want.  This combined with a small enough field where everyone can meet each other makes it a much more personal experience than the massive 1500+ athlete pit plus crews that are at WTM. Elizebeth Bridges and pacer Katie Villareal on going over the over/under railroad ties.

Overall Experience:  Overall, it was a great experience that I’m glad I went down for and a great end to the 2020 race season.  I don’t ever recall meeting Kimberly, although after talking to her husband she handed me my finisher medal at Conquer The Gauntlet Little Rock at least once.  I don’t ever recall meeting Charles prior to this weekend either, despite us being at every WTM since 2014 together and must have passed by each other literally dozens of times on course.  However, it was nice to support someone in the community and be apart in honoring Kimberly’s memory. From my perspective it seems like all anyone does in 2020 is complain about what they missed out on this year instead of being thankful for what they have.  Running in memory of Kimberly was a good reminder that we should always be thankful.  Like Charles said to me when we were discussing his late-wife on course, “always tell your family you love them when you leave, because you never know what tomorrow will bring and if you may have just missed out on your chance to say goodbye”. Kim and Charles on their last big vacation in Hawaii.