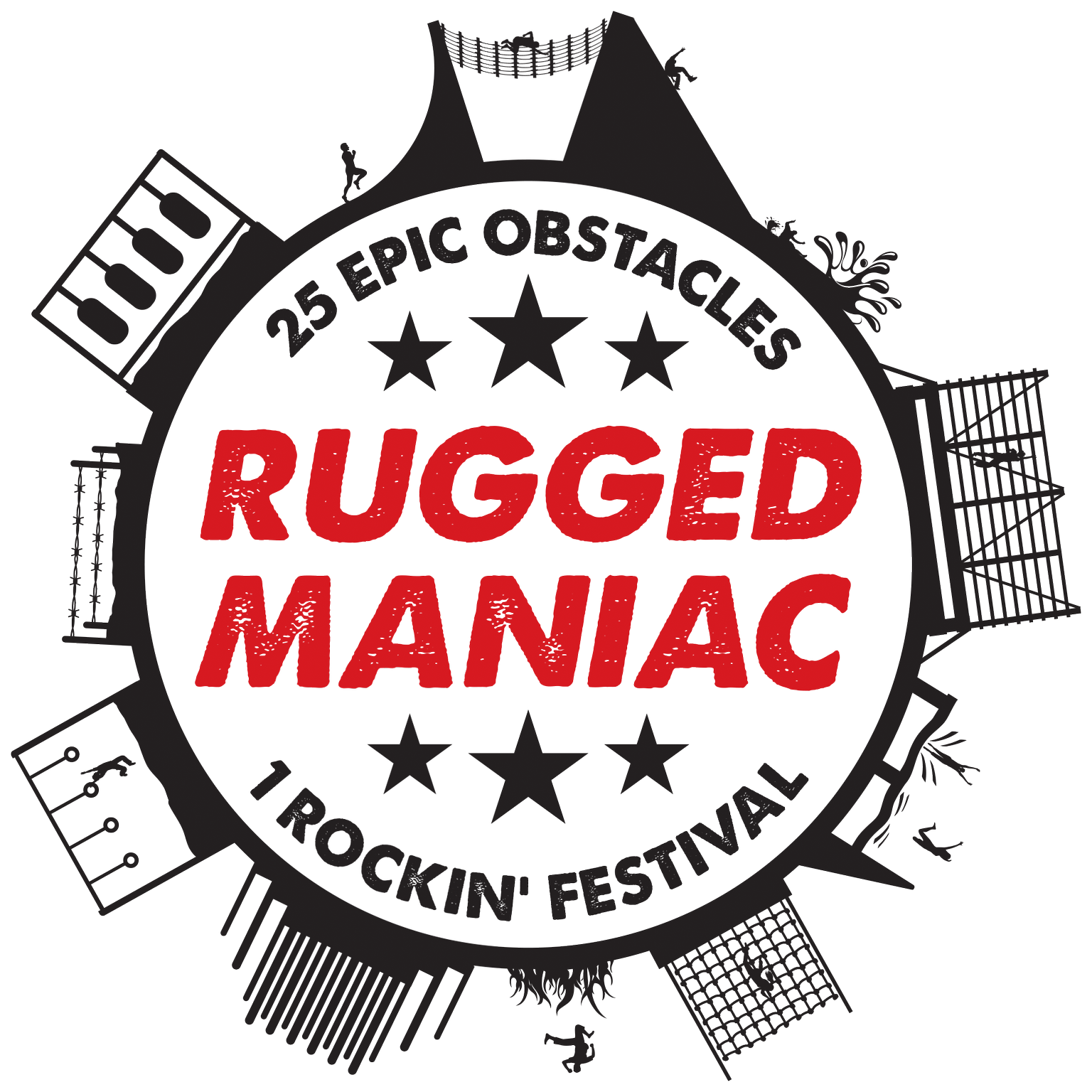 http://www.ruggedmaniac.com/
Use discount code MRG21 for $5 off your Rugged Maniac registration!!!!

Looking for adventure? How about a day filled with 25 epic obstacles, a crazy party, and plenty of beer? Rugged Maniac Obstacle Race has you covered! Here's how it works: Sign up for the race and you'll run our 3-mile course where you'll climb towers of shipping containers, rocket down a 50′ water slide, bounce on trampolines, jump over fire, and more!

Before and after your run, you'll get to party with thousands of other maniacs in our day-long festival where you can ride mechanical bulls, pretend to be a kid in our adult bounce houses, and dance your butt off in the festival and enjoy lots of new games and activities. As if that wasn't awesome enough, you also get a high-quality t-shirt, an awesome medal, free professional race photos, and a beer (if of legal drinking age) with your registration!

Unlike the other guys, we don't nickel and dime you with ‘insurance' and ‘processing' fees that add $30 or more to your registration cost. You'll pay the price listed on the event page plus any tax required by the man. That's it. So what are you waiting for? Reserve your preferred start
time today!

Click an event name to view the event details. Scroll past this, or click here to see the review section
Browse our calendar of previous mud runs, mud races & obstacle races for Rugged Maniac

Rugged Maniac Reviews from the Community

Average rating: 3.99 / 5 from 75 reviews.
(Scroll up to see a list of upcoming events for Rugged Maniac)

Due to inclement weather (tornadoes),if you could not race and if you requested it they transferred my registration to 2018 race. I ran this in 2016 it was my first one and loved it. Can't wait to go back and try it again!

One of Rugged Maniac's big selling points is that unlike everyone else, they offer refunds! A few days before the race, acres and acres of the deadliest wildfire in CA history broke out and continued burning throughout race day. The race was near the fires. Breathing the fire air for so long made me have cold symptoms, so I thought running in that air would be a bad idea, and requested a refund two days before the event. They denied my request because it wasn't a good enough reason. WHY would you advertise refunds as a huge selling point when you won't give refunds for gigantic, air-compromising wildfires?? So frustrating.

This was my third year in a row doing the Rugged Maniac, despite saying i would never do it again after last year (that first hill is a doozy! Note on that later). I added the new VIP option to my registration which was a bit of a joke: i managed to utilize the VIP services i signed up for despite the lack of direction from the race organizers in how to. That alone would've dropped my review down to three stars if it wasn't for the fact that i think they shortened the initial hill climb by a good half. The race is still a tremendous challenge! They changed up the obstacles too, taking out one of my favorites (not a big deal). Incidentally, according to my Apple Watch, the actual distance of this "5K" was actually 3.6 miles.

Out Of Control Awesomeness

The only bad part about this race was my physical shape. However, I cannot wait to improve and come back stronger and fitter. The hills were absolutely brutal and really challenge you physically and mentally. The obstacles were fun and surprisingly I made it up the warped wall. It was very well organized and you could usually hear the music wherever you were at on the course. Great experience definitely recommend.

I wanted to do this more for the obstacles than the running part (25 of them in 3 miles was great) and signed up on a whim. However, I was totally unprepared for the level of aerobic fitness this course demanded. The start is up a 1/2 mile slope of 45 degrees or more in some spots. Even walking is very difficult. The obstacles were set up for pretty much anyone to make it over with good effort. This race fits into the ski area perfectly, it's how they should all be run, though most places simply don't have those types of hills available. The only drawback for the race were occasional backups at obstacles which can't be helped with thousands of people running, even in waves. My personal drawback was unpreparedness. I made it through the course but would have had much more fun if I had more aerobic level. I spent far too much time gasping and walking at the edge of safe/dangerous. I hope it comes back to KC though it's not on the schedule yet. I would make this a yearly trip for certain.

The whole event was well set up and able to accommodate a large mass of people, great set up for tents and side attractions. There was a lot of fun obstacles but one in particular sent my girlfriend to the hospital with 3 broken bones above her ankle and a fracture below it. It was a jump off a trampoline to smack a gong and a fall into a muddy water pit. The problem is that when they expect you to jump high enough to hit the gong you would expect the fall into the water would be deeper than 2 feet. There were other people showing up at the same hospital for the same exact reason. Hope they make changes on their other courses quick to avoid more severe injuries for other racers, 6 weeks out of work in a cast isn't worth it

As I have now graduated from absolute beginning to stuttering novice I have learned one key nugget of truth: Run early.

Certainly this comes across as a no-brainer for anyone that has lived in Southern California, specifically the Inland Empire for more than a month or two and for someone that has called So Cal home for 45 plus years should know. Just inherently know that if one must run, one must run early in the day.

I am a slow learner. Obviously.

During the chilly month of March I signed up for Rugged Maniac – So Cal I and opted in at a discount price of $54 bucks, American. After all running earlier requires a larger payment. Good business sense. However, being “thrifty” with my American money I opted in at 130 pm.

We arrived at 1200 per instructions to arrive early and checked in quickly, efficiently, and with minimal challenge. This is critical to note as previous reviews suggested check in to be a challenge at this event. Not at all.

Temperature was a modest 98 degrees.

At 12:10 I wander down to the starter corral. Similar set-up to all the others, hop the gate, get ready, prep talk, and off. The spectator area is elevated and my wife got to watch me. The set-up at Galway Downs is perfect for spectators.

The course itself is flat and dry, with minimal elevation change, if one calls running through gullies and washes a change in elevation.

The obstacles are a mix of typical and new. Run through water, crawl through mud, climb over barriers, hop over 8-foot walls, and what not. Relatively easy but the first half of the course held all the running. The distance between obstacles, in the heat and dust, became its own obstacle.

A few personal highlights were the Ringer, which I nearly made across, thanks in part to the Warrior Pak gloves and other obstacles, including: the Lilly Pad; the blobstacle (LOL), Antigravity, Bang the Gong, and the Warped Wall. In reality the Warped Wall did not prove to be a “highlight” insomuch that I made it up and over and hoorah, hoorah, hoorah. Rather, I never had the opportunity to slam into a wall on two attempts, rip the hell out of my knees and ankles, and look utterly ridiculous with each attempt.

Overall I consider Rugged Maniac top-tier along with Spartan, BattleFrog, and Tough Mudder. A bunch of other runners called it “easy” or “less challenging,” but I find each step to have its own challenge.

There were a large number of groups that ran together, which I find outstanding and annoying. Some of the obstacles stack up with groups but it’s all fun until someone cracks a rib (happened) or passes out from heat stroke (happened as well).

Ultimately I found this to be an outstanding race, one that challenged my stuttering beginner status. I was humbled down a notch and that only helps after a little more reflection. This is a fun race and a serious race, Rugged Maniac does a great job mixing it up. The medal is shiny, heavy, and a nice add to the set; the tee-shirt is pretty plain but I wear it with pride.

At the end the skies filled with clouds, my wife found a spot under the trees, and a nice breeze kicked in that cooled us down to 95 or so degrees.

I will return in November for So Cal II. By then I will have another seven or eight races under my belt. Maybe I will do better. Fortunately it should be cooler….Should. It is Temecula, the Inland Empire in Southern California. You never can tell the weather.

This was my first run. I hurt my knee the first obstacle EMS was called after 20 minutes of waiting they never showed.

It was definitely too hot to only have 2 water stations - they would only give you one cup because they were short on water.

After pushing through the pain and getting my 2nd wind the race was great everybody was helpful to other racers.

Some obstacles were pretty scary as if you were as short as I am and were unable to reach a ledge you'd fall directly on to concrete. As well I don't know what they used to mix some part of the mud but it was absolutely HORRID smelling.

Plenty of food trucks, DJ was great so was the MC, volunteers and staff were super friendly. Can't wait to do another one.

AWESOME FUN! But...this year the rings were right after crawling though the mud....the rings were muddy...our hands were muddy and it WAS NOT easy. Took me 7x to cross- I made it on the first try last year....but in order to place you must complete each obstacle. I wasted 10 minutes until I finally crossed. Hoping the rings are before the mud crawl next year!!

business 0.3
The Ultimate Mud Run, Obstacle Race and Adventure Race Guide , USA 3.9 5.0 58 58 This was my second run at Rugged Maniac, and not much has changed. In place of being at the local baseball stadium complex, this time it was staged at Wild Horse Motorsport Park...
Page:
‹1234›»