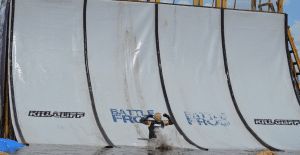 This was my second trip to Florida to race at a BattleFrog event in less than a month. I was again running the Xtreme version of the BattleFrog Central Florida event. For participants in the Xtreme Race, runners begin by completing the 15K course at 8:30 AM and then run the 5K version again and again until after 3pm.  Male and female winners of the Xtreme Race rewarded a very nice BattleFrog paddle. For completing the BattleFrog Xtreme you receive a gorgeous medal and also earn an additional star for each lap through the course. 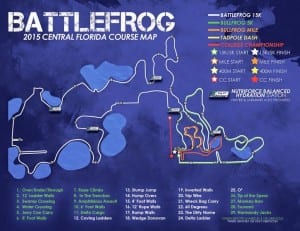 The race started out with an amazing pre-race pep speech by Coachpain Dewayne who is by far one of the best inspirational motivators in the OCR world. The course started with a short sprint and the first obstacle you attack was “Over/Under/Through”. Up next came “12 Foot Ladder Walls” which was a chance to do a nice easy obstacle. Next came a “Swamp Crossing” which even in the early morning, I enjoyed the chance to be in the colder water. By lap number three, the sun was blazing and it was a hot day and I even enjoyed the swamp a lot more.

The “Jerry Can Carry” obstacle proved to be brutal on the grip and upper body, many struggled on this obstacle. I then came to a “8 Foot Walls” climb. The next obstacle was a “Rope Climb” which had a very cool twist, you were in about 4 ½ feet of water and had to climb ropes that got very wet fast. The part of this obstacle I enjoyed most was being in the cool water, it was another opportunity to cool my body down on what was turning into a very hot and sunny day. One of the next obstacles that came was the “Amphibious Assault” which is one that I have only seen used by BattleFrog and gives you a chance to shoot a target with a paintball gun. I was able to hit my target on all three laps within two shots.

At this point of the course, it splits for the 15K and 5K. The first obstacle on the 15K side was “Caving Ladders”, which started you in about five feet of water and then had us climb up a military ladder and onto a ledge high above.  The next few obstacles were “Stump Jump”, “Hump Overs”, “4 Foot Walls”, and “12 Foot Rope Walls”, between my bad back and lack of the typical upper body strength I am used to having the only obstacle I really struggled with was the “12 Foot Rope Walls”. I then came to “Ramp Walls” and then on to the obstacle “Wedge Donovan”. Credit for this obstacle has to go to BoldrDash as that is where I originally first saw it. 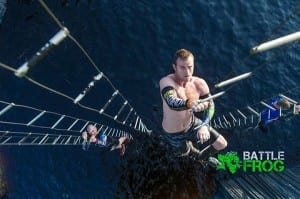 Up next was “Inverted Walls” and the volunteers at this obstacle could see I was in great pain and struggling and offered to give me a hand to complete the obstacle. I passed on assistance and was able to complete it on my own, but the two volunteers were awesome and cheering me on the entire time! Two obstacles later I came to the new “Wreck Bag Carry” obstacle which was a pretty good distance in what I recall being an orchard. The next obstacle was “60 Degrees” which is a pretty intimidating obstacle to climb and get over the very top metal bar once you are sore and tired. Then came “The Dirty Name” which is the name for almost the exact same obstacle in Navy SEAL BUD's training, the obstacle is also sometimes called the Sternum Checker. I always take my time with this obstacle as I fear I will break a rib. Up next came the obstacle “Delta Ladder” and on this specific version the gap between each ladder was pretty long and I feared for shorter people on this one. The last obstacle on the 15K trail was “O3” which was actually one of the very few obstacles that was part of the permanent course which had you climb up a telephone pole and then slide/traverse down a wire/rope covered in plastic. 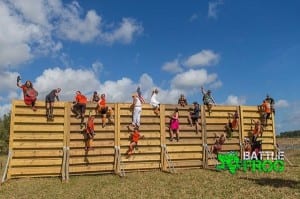 The course was fun and challenging, but definitely not as hard as the BattleFrog Miami course just two weeks earlier. It didn't rain this time, so the heat and scorching sun did make up for some the lack of obstacles.

I want to point out a few things that happened at this event. Co-founder and former Navy SEAL Michael Donnelly can always be found around the finish area and helping at the “Tsunami” obstacle, but while starting my second lap, I witnessed him climbing up one of the ropes on the “Tsunami” and using his right leg to help a racer climb the obstacle and complete it! The was awesome to witness and I am not sure any other OCR has someone on the course helping people complete obstacles let alone one of the OCR's Co-founder.

Last but not least, I have to give a shout out to BattleFrog’s DJ Haviken Hayes who as always, played a great play list all day and did his typical awesome job on what was a busy day.

The Xtreme medal is amazing; it’s big, heavy, and sexy and the stars are very cool and a great touch! This time, Xtreme finishers were not provided the individual medals for the 15K and each completed 5K, which is what I expected as they have said from the beginning we would only be awarded with the Xtreme medal. I was mistaken in my last article about the finisher shirt, it has been changed from last year and now has more color and is even cooler than last years.

Our very own Tony Ferrante was married this past Saturday at BattleFrog to the love of his life Laurie. MRG and I want to congratulate the two of them. 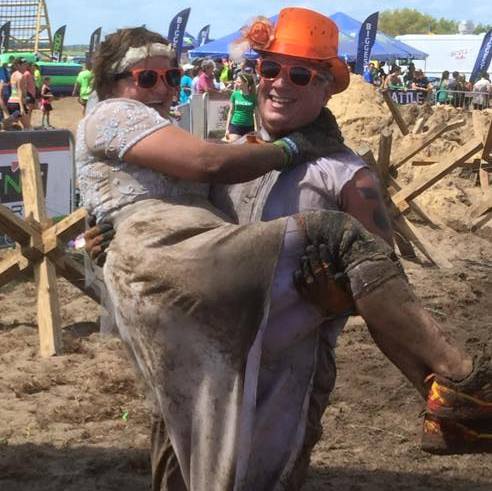 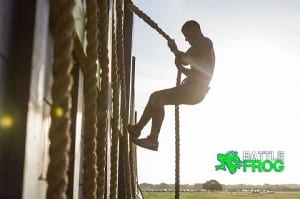 The event/race was a great time, but I do have to point out four area's I would like to see improved/fixed for the next race.

First, for the second race in a row, at least all the 5K water stations ran out of cups. I rather they run out of cups than water and to be fair the volunteers were awesome and held the water jugs above each racers head to quench their thirst and prevent dehydration.

Second, it was a hot scorching day and not a single one of the volunteer stations (water or obstacle) had an umbrella or any type of protection for the volunteers from the direct sun and heat.

Third, the “Monkey Bars” obstacle needs to be redesigned to be in deeper water or other means to prevent racers from falling and being potentially injured.

Fourth, the registration tent at least really early in the morning (was still dark out) moved slowly for the Elites, both the Elites and Xtreme racers registered on the same line and this caused some delays and stress. I would suggest in the future they have at least two lines for Elites (A to P & Q to Z) and have the Xtreme's register on any line and just have the volunteer walk over and get the correct Xtreme registration package. All four of these fixes/improvements are not hard and I expect by the next BattleFrog event/race all four will be corrected.

I want to dedicate this article and Xtreme run to Ted Heleotis the father of Jason Heleotis (CEO/Race Director of MudManX) who in November found out he has stage four cancer. My thoughts and prayers go to both Ted and his entire family. Keep fighting, the only easy day was yesterday.

Have you done a BattleFrog? Share and rate your experience…