BattleFrog Series has been waging a war within obstacle course racing, yet not the one we've come to expect in this 5(ish) year-old sport.

Can the Hardest Race in OCR Also be Beginner-Friendly?

As BattleFrog Series started to grow in 2015, the addition of a second rig and increasing the difficulty of some obstacles coupled with multiple heavy carries began BFS' development as one of the most difficult races in OCR – at least from a grip strength and upper body perspective. Early 2016 saw a lot of the same and even some additional emphasis on grip strength. With back-to-back obstacles testing each athletes ability to hold on to a rope, ring, wall, or even hoist themselves up, it became clear that BattleFrog's mandatory obstacle completion was a daunting task for many aspiring “competitive” athletes toeing the line with the pro team members in the Elite heats. 2 grueling laps of hardcore racing with 30+ mandatory completion obstacles? The spring event in Phoenix saw only 2 (yes, TWO) athletes make it through on the first try of Rig #2 in the elite heat. Some elite athletes were on the course tied up on that rig for hours, refusing to let go of their bands until well after the winners had received their awards, and went back to the hotel to shower (I'm looking at you and your indomitable tenacity, Brad Sweeney).

Now, how do you make an event that crushes even some elite athletes palatable to beginner athletes – the main segment that BattleFrog Series needs to draw from in order to succeed?

BattleFrog Series is nothing if not ambitious; scaling an event from 3-6 events is a big deal, and moving into a new state is fraught with difficulty on levels of magnitude to putting on an event in your home market – ask any race company in (or out) of business now. What BFS did is beyond definition, and beyond reckless for any other event to even attempt. The sport is littered with the carcasses of races that tried, yet this is not a homage to their failures, it's a nod to the audacity of BattleFrog's ownership and executive management; they have a plan of action that would make any CPA tremble.

For BattleFrog to expand at the rate they intend, they need to think way outside the box that is OCR now, and start building a much, much bigger box:

In the ultimate Field of Dreams test, BattleFrog Series is building courses in every state – some states with multiple venues for return visits during the 2016 season, a nearly impossible task for any crew to coordinate – but first, they need to develop the course for the new masses they anticipate from the added mainstream exposure. Early in the 2016 season, the BattleFrog Series team was literally flying the plane while they were still putting it together, and miraculously they held it all together long enough to get the steering system in-place and extend the landing gear for the season kick-off in SoCal. 9 events in as of mid-March, and it appears they've not only finished the plane, but are ready to construct an entire fleet… there's still something like 30 more events to go!

From a safety and scalability perspective, the BFS crew developed MOB's, an aluminum obstacle erector set that is easily customizable and extensible. A small crew can crank out a series of obstacles in an extremely truncated build; an example shown in the time lapse below.

Race Directors care about scalability and safety, racers just care about fun and challenges. OK, also a little bit about safety too, but mostly fun stuff. If BattleFrog wants the crowds, they need to deliver a course for the masses unlike what they rolled out through the first half-dozen events in '16, they needed true “beginner-friendliness” to be front & center – and not just the Tadpole Dash.

Full disclosure: I peppered the sh*t out of BattleFrog earlier in the season about this, but in no way can take the credit. OK, I'll take some. No, scratch that. The point I'm trying to make is they *do* listen, analyze, and adapt. 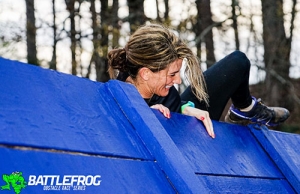 Even if you have no idea how far a 5k is, most people have some vague idea that it's a relatively short distance. 36.2% of people that I randomly made up in this fake statistic think a 5k is about 5 miles long, so BattleFrog listing their Open wave at “8k” is a second level of confusing, and even those aware that a 5k is 3.1 miles need to do a little, uh, math to get to the 5(ish) mile mark. Confusion doesn't help sales, but I digress. (Note: this is one of those things I hammered on them about, can you tell?)

The “Open” wave at BattleFrog Series is one loop of the 8k course. The Elites do two, and the BFX do as many loops as they can, a minimum of 3 to complete the BattleFrog Xtreme challenge. While the Elite waves are held to mandatory obstacle completion, the Open (and BFX) are allowed to bypass an obstacle by performing ten 8-count bodybuilders. With 30 obstacles spread throughout the 5 mile course, there's an opportunity for a whole heckuva lot of calisthenics – and that's not what an OCR is all about; people pay and show up to tackle obstacles.

“Obstacles that were once thought to only focus on testing the strength of the elite field happen to be the most fun to complete…when you can. With the implementation of the varying difficulty lanes, everyone gets to challenge themselves within their own ability, making for a better overall experience for the runner and the spectator. Leaving any obstacle feeling victorious rather than defeated is not something reserved only for the elite runner; it is something we believe everyone should experience.”
– Adam Washburn, BattleFrog Series Race Director

BattleFrog has approached this dilemma from 2 directions, making easier lanes on obstacles, and making even the ten 8-count bodybuilders optional as beginners battle their way through a course. Some “OCR purists” familiar with Spartan's mandatory 30 burpees will scoff or eye roll at the mere thought of receiving a finisher's medal without doing the required calisthenic penalty but even Spartan Race has made some hints about backing off of enforcing the 30 burpees after the Elite and Competitive waves have finished, we're still letting this shake out for a few more events before pressing the issue.

Penalties aside, the big news (and actually the whole reason for this article) is the easier lanes on obstacles, specifically the Platinum Rigs. As I mentioned above, Rig #2 in Phoenix was so challenging, the entire Elite field was backed up for quite some time (aside from Marco and Viktor who both completed it on their first attempt) and modifications were even made to help ease some of the backup by adding an additional hold to the “Men's Elite” side of the rig. The Women's Elite half of Rig #2 (all 8+ lanes of Rig #1 were the same) was far easier, but still a challenge for the Open athletes and BFX'ers that figured out they could use it.

Beginner-friendly 101: If there aren't signs, athletes have no idea what they can or cannot do on an obstacle. Volunteers are great, but unless they say the same thing to every. single. athlete. then they aren't as efficient as a few well-placed, understandable, readable signs.

So, color me surprised when my partner Chris Lewis mentioned the “multiple lanes on the rigs” in Atlanta a couple weeks back, and I immediately reached out to my buddy Beard™ to get the scoop:

“We at BattleFrog are committed to an excellent experience for the whole family and welcome all fitness levels to come participate. Like a ski resort with different levels of slopes from bunny to double black diamond, our obstacles incorporate the same thinking to include novice, intermediate and expert. Some of these examples are the walls, tip of the spear, the platinum rig, and rope walls.”

I snagged Sarah Watson on Messenger to get her take on it, and she nailed an extremely important point – listening to the concerns and reviews of the open wave runners:

“BattleFrog has earned a particular reputation because of their hard rigs and mandatory obstacle completion. They listened to the reviews and concerns of open wave runners, which make up a vast majority of our community, and introduced multi-lane rigs with varying difficulty to address these issues.

I love that BattleFrog has made changes in their obstacle designs to cater to all levels of the sport! I, personally, fell in love BattleFrog because of their obstacle difficulty, but not everyone is the same. BF found a way to allow the open wave runners an option to still feel accomplished by completing an easier lane, but without sacrificing the difficulty intended for the elite runners. BattleFrog is dedicated to progressing the sport as a whole, and they understand that can't happen by catering to one specific level of OCR. They are finding ways to maintain their high level of difficulty for the elites while still making a fun event for open wave runners and leaving everyone feeling accomplished at the end of the day. I think that's pretty awesome.”

“I personally love the addition of skill lanes allowing each participant to become motivated and test themselves on a level they feel comfortable with. Rather than attempting different events based on how ready you feel physically, you can find all at BattleFrog.”

BattleFrog – The Next Generation?

Beginners are requirement #1 to BattleFrog Series' plans to dominate the world of OCR, and they are making some huge steps with these changes. Do they need more? Maybe, but time will tell and from Sarah's response above, as the BattleFrog management team settles into their new roles after some turnover and shifting around responsibilities, they are more than open to listen and learn.

Speaking of the next generation, we started receiving numerous emails from news outlets all over the country looking for more info on Milla Bizzotto, the 9 year-old athlete who completed 6 laps of the BattleFrog BFX24 course earlier this month. Margaret was right there with her for many of those 30 miles, and even before the race started put together this preview: https://www.mudrunguide.com/2016/03/racing-24-hours-to/. During the event, M captured a lot of Milla's accomplishments, below are some highlights:

Ready to take on a BattleFrog Series event yourself? See all the events right here, and Save $20 w/discount code MRG20