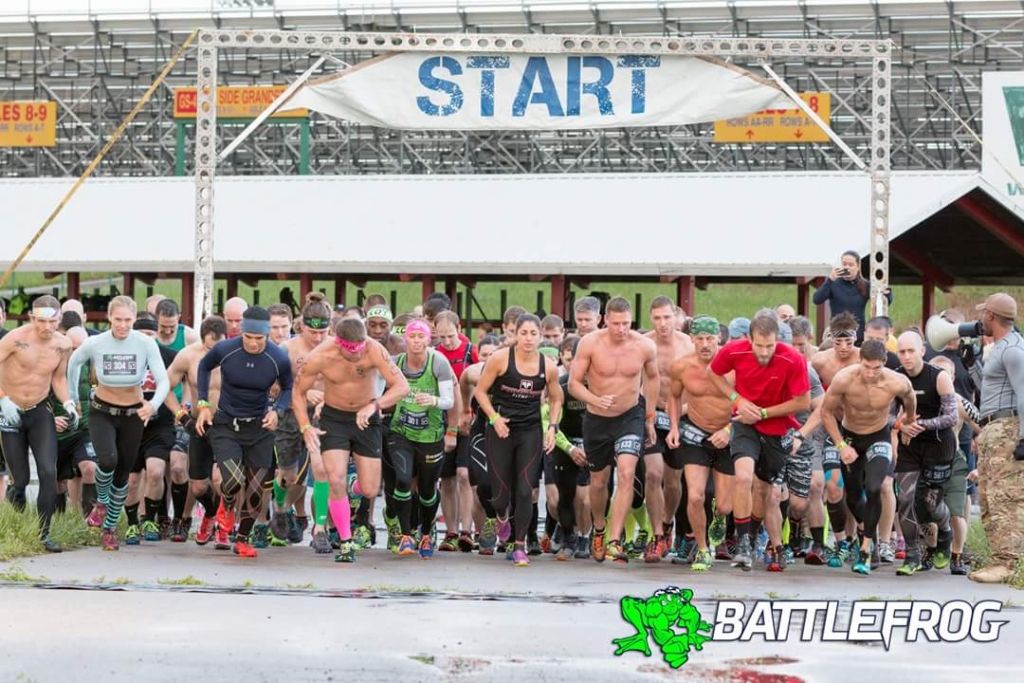 This weekend was my first obstacle race of the 2016 season and I decided to start it with a bang at BattleFrog Greater Kansas City which was actually held in Topeka, KS… Don’t get me started on this practice by obstacle racing companies of naming a race location by its closest major metropolitan area and not the city/ state in which it’s actually located, but I digress. I have been training long and hard on obstacles since my last BattleFrog Series event and was looking forward to testing my metal after all this training.

The race venue for this event was a racetrack near the Topeka airport. Apparently Tough Mudder has utilized this location twice before with not so stellar reviews so I was wondering what race director Marco Bedard and his Frog crew would come up with to utilize what this site had to offer. The weather during the week prior to this event was crazy; including tornados, heavy winds and rain created a lot of soggy land. This resulted in a lot of last minute changes to the layout and numerous logistical issues that the crew had to overcome. What came out of it was still one of the most difficult flat courses you will ever see. This wasn’t entirely by design but when mother nature plays such a role in how a race plays out then this is what you get; an awesome race in poor conditions that played out pretty well for the competitors minus a few minor issues which could have been major problems in a larger event but in one with a lower turnout (about 1,000 racers who actually showed) it didn’t prove to be too bad. 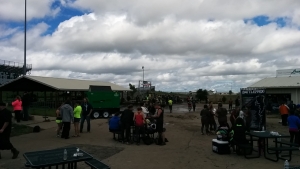 As I mentioned earlier, the weather forced a lot of last-minute changes to the course. I only notice one of these changes prior to re-reading the course map post-race. This alteration was the subtraction of one of the Platinum Rigs during lap one for the Elites. The reason for this was they had to move the entire festival area the day prior due to all the rain and this meant an entire reroute of the Start/ Finish. What was going to be the final obstacle (Rig #2) would now have been one of the first obstacles and in the wet conditions would have resulted in huge back-ups. In addition, the Wreck Bag portion of the course was to be near the beginning on a dirt track which was now going to be more of a “mud mile” than a Wreck Bag run. To combat this, a portion of the course was entirely removed and we were rerouted around that area forcing the Elites to skip this Platinum Rig during lap 1. This alteration was pretty seamless in my mind. 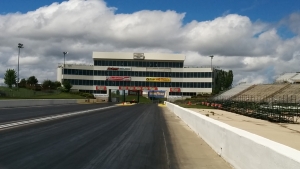 As it was, the first obstacle we hit was a Wreck Bag Course over and around the bleacher area of the racetrack. This instantly gave me flashbacks of Raceway Park, NJ, where I participated in the World’s Toughest Mudder in 2012 and 2013. Was this an omen of what was to come in this race? I guess I was going to find out!!! This part was a bit dicey in that we were running on metal bleachers with a Wreck Bag so it could have been bad with overanxious racers attempting to pass, etc. However, what ensued was a much more conservative start to this race which was a great thing. Nathan Palmer and a few others pushed the pace immediately following the carry in what would prove to be a slower race due to all the creek runs and soft mud. They removed a few of the climbing obstacles like the Rope Climb and the 12-Foot Rope Wall, but the added difficulty of rain-swollen creeks and soggy ground more than made up for it. Instead of ankle deep water we were in waste deep and fighting a pretty strong current upstream. There was a ridiculous downpour just before the race so EVERY obstacle was drenched. This increased the difficulty of everything from climbing the walls to the ropes, to gripping the metal structures, and made this race a bear that crushed a lot of great athletes. The conditions also hindered the fast runners and brought the field closer together even for those who blazed through the obstacles. This made for good competition especially since none of the BattleFrog Pro Teamers were racing at this event. Apparently somebody forgot to inform the Conquer The Gauntlet (CTG) Pro Team that this was a BattleFrog race because they pretty much torched the field! 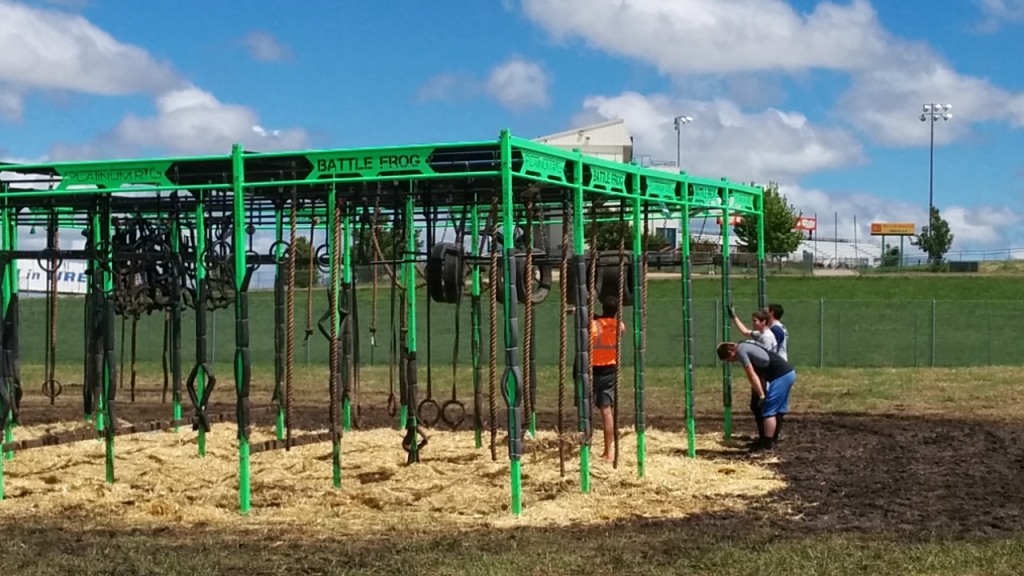 I could go through every single obstacle that gave people trouble but it’s so difficult to explain how much the rain added to this event that didn’t seem too bad on paper. Marco and his team worked 16-18 hour days for two weeks preparing, then altering, and then making further changes to this course to combat the weather. In the end, it was water that got us. It didn’t rain during the race, 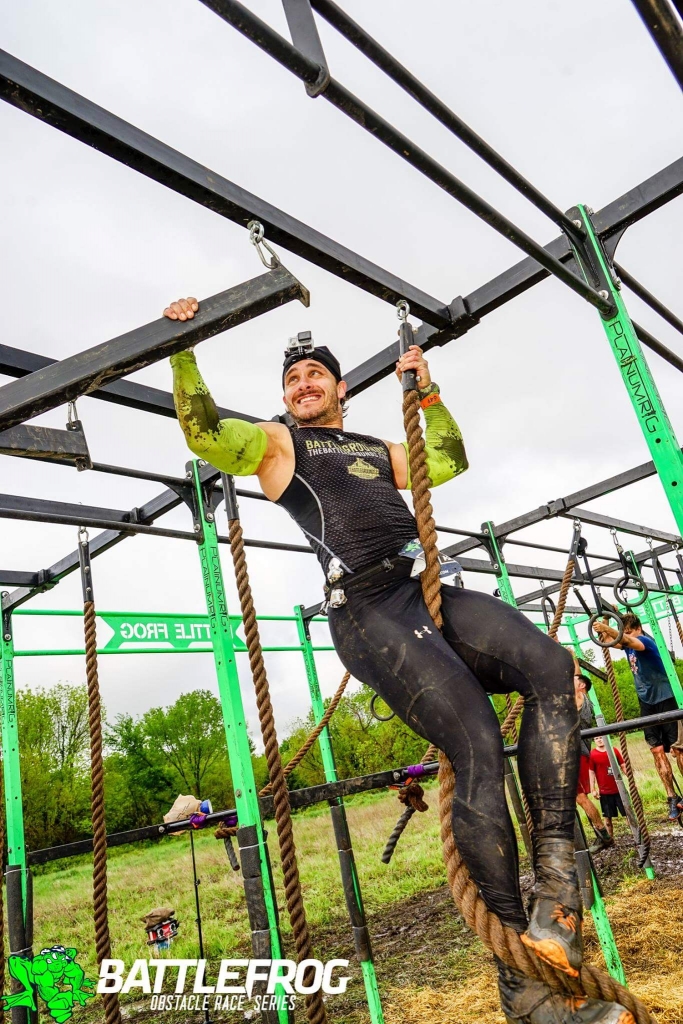 but it was cool (low 50’s with no sun and a steady 15mph wind). This didn’t help once we were soaked. There was no part in which you were dry. The first real grip tester was the Wedge Wall about 1 mile into the race. Luckily changes were quickly made to make this more doable, but it was a microcosm of the day.

When grip specific obstacles get wet they take bands, and this is something BattleFrog is going to struggle with since these challenges are kind of their “thing.” The Platinum Rigs were tough but doable in their designs. BattleFrog added tires on the ground in which to rest and made changes the configurations a bit but the mud and water were too much and Rig #2 on Lap number two took 70% of the Elites’ bands on this day. This race saw only 21 Elites escape with their bands with yours truly being one of those twenty-one who didn’t DNF. I will interject a point to any of the so-called “elites” or at least those who were competing in this wave at this event. Learn how to tie off a rope with your feet or you will suffer a similar fate every time your grip strength is compromised. It’s my guess that as much as 50% of the bands lost at this race were due to the participant lacking this skill!

I can’t speak of what this was like for the Open Wavers other than the ones I spoke to didn’t have much to compare it too but had a great time. Even first time BFXer’s Eric Jenkins and Wade Schoeneweis had a blast. Wade, who completed Worlds’ Toughest Mudder in 2015, stated, “this was my favorite regular OCR!” I spoke to numerous people regarding their experience at this event and by enlarge, people loved it. There were issues such as parking signage and course signage/ directions that could have been better. They could have made major course changes that would have made things easier on themselves and much more boring for the racers but they didn’t. What they ended up with was an awesome event in a tough environment in the middle of Kansas. If Dorothy had been at this event she too would have been swept away by the difficulties that came about, but I, and many others, who braved the Midwest weather will be back in 2017 to race here again should they retain this site. 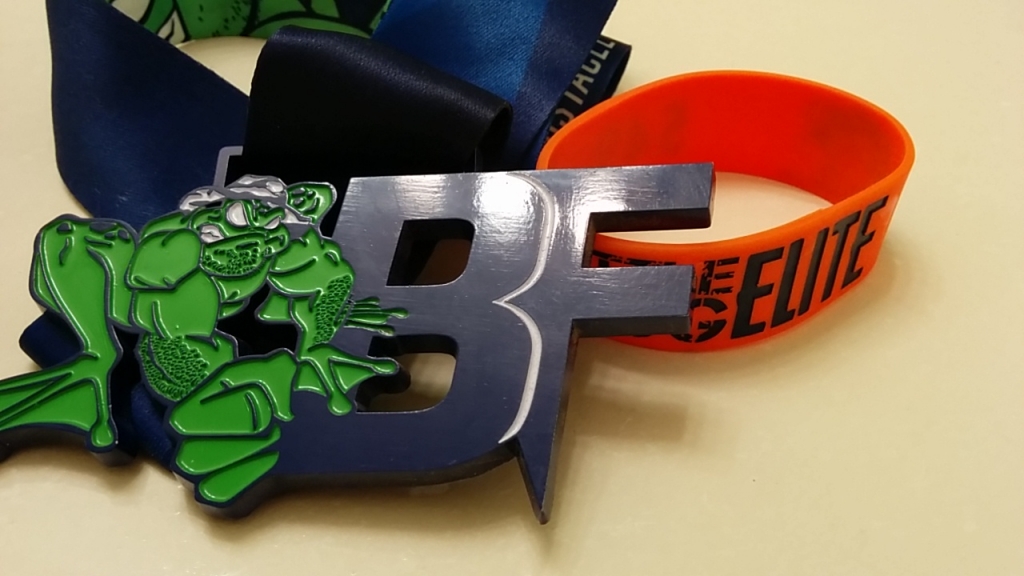 Congratulations again the CTG Pro Team who saw four of their athletes podium on this day, and a big shout out to Marco Bedard, Chris Acord, and the BattleFrog build team who put so much work in holding this event together with bailing wire and duct tape. The consensus is in; it was a blast! I can’t wait for my next BattleFrog race.