Standardizing Failure? An Examination of the 100% Obstacle Completion Discrepancy between Men and Women at OCRWC and Beyond

There exists a growing concern regarding low completion rates as of late. As OCR innovates to challenge veteran racers, events have seen low 100% completion rates. Just months ago, Mud Run Guide Editor-in-Chief, Margaret Schlachter, wrote the Op-Ed, “How May Rigs is Too Many Rigs,” following the European Championships where only 3% of elite females (1/33) kept the 100% obstacle completion band, and only 13% of the men (13/99) finished without fail. This begs the root question: When is an event too hard?

Any championship event evokes the expectation of a significant challenge for all competitors. Since obstacles should be the heart and soul of any OCR event, it makes sense that a championship require 100% obstacle completion. Given this expectation of significant challenge, overall fail rates are anticipated to measure considerably higher than an average qualifying race. Though the Euro Champs saw abysmal completion success rates for both sexes, there was only a 10% discrepancy between the two; that signals that the event was too hard across the board. Now compare to the 2018 OCR World Championships from just a week ago. Of the males competing, 60% successfully completed the 15K course without fail whereas the female completion rate was a mere 11.3%. This discrepancy is significant, so I researched rates from previous years. 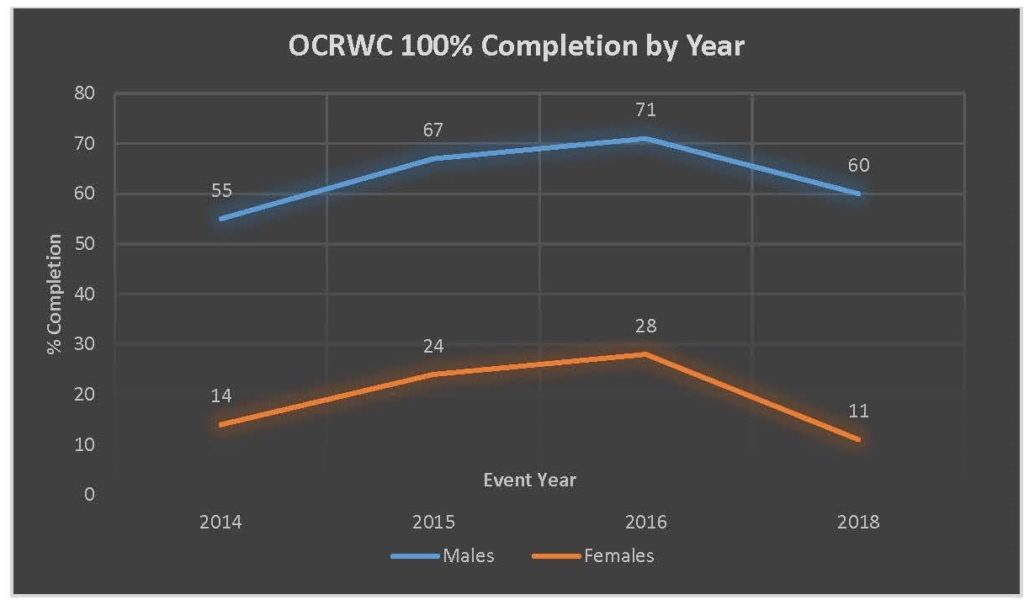 *2017 data not available at the time of writing

Interestingly, the chart above illustrates that both men and women performed consistently better from 2014 to 2016 and then consistently worse in 2018, keeping the completion discrepancy between men and women in the range of 41-49% for all four data years. The visuals presented in the chart signals to me that the obstacles in 2018 got harder for everyone, not just the ladies. Still, even if 100% completion became more challenging across the sexes, the 11% pass rate among the women is still alarming. So what’s the deal?

Since it would be irresponsible to glaze over the drop in success this year, let’s consider the sheer volume of obstacles at the 2018 event. Race organizers absolutely packed the 15K course this year, presenting 100 individual challenges. Given the previous years’ championships ranged from 61 obstacles in 2014 to 43 last year, the increase to 100 is substantial. If you consider this in terms of the FITT-VP principle (Frequency, Intensity, Time, Type-Volume, Progression), I suspect racers trained for a 40-60 obstacle event, yet were unprepared for the volume presented at the 2018 event, leading to the marked decrease in 100% completion for both males and females.

Assuming that volume contributed largely to the decrease in 100% completion across the board, it seems to me that an examination of obstacle design is warranted when considering the low pass rate among females in particular. Given stats from previous years where a single grip-intensive, upper body taxing obstacle claimed the most bands (i.e. Platinum Rig, Skull Valley), and 87% of the remaining top band-stealers were in the same category (Rope Climb, Stairway to Heaven, Tyrolean Traverse), there lies a solid reason to suspect grip-based obstacles contributed largely to the low pass rate among females. This begs the next question: Should obstacles distinguish separate lanes for males and females? 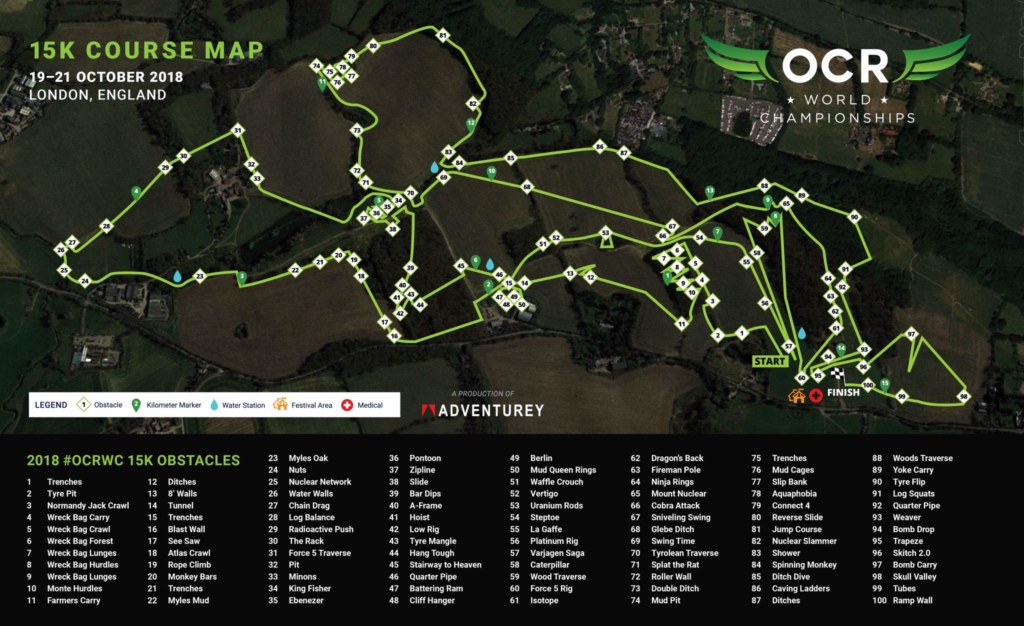 Before discussing grip, let’s first examine an obstacle that generally divides men and women–heavy carries. The argument for this distinctions lies, assumingly, in the average difference in height and weight, and, thus, loading is altered to an average percentage for each (i.e. 80lb carry for an average 175 lb male = 45% loading vs. 50lb carry for an average 140 lb female = 36% loading). As a small-framed female, I can appreciate the separation since the men’s carry would add 71% of my body weight. Understanding that the terrain commonly combined with carries can be treacherous with an inappropriate amount of added weight, I think the difference for men and women warranted if for nothing other than safety concerns. But then again, we are all required to sign a waiver…

Now let us review the science for a brief moment. We understand that men tend to possess more upper body strength than women. Physiologically speaking, elevated levels of testosterone yield greater anabolic hormone production which translates to muscle development. Larger frame + larger muscles = increased potential muscle fiber recruitment. On the other hand, increased weight means a greater struggle against gravity. While I don’t feel gravity evens out the playing field exactly, it does support the decision not to distinguish rig lanes due to physiological differences between men and women.

But hang with me here–I love rigs and all things grip. These are the obstacles that I find the greatest triumph. Most of this success lies in my pride as a physically strong woman, but another significant factor in my triumph lies in my small stature, standing only five feet tall. Thus, the short girl with the T-Rex wingspan wishes grip obstacles could be standardized by height rather than gender. Many a race I’ve had to climb or leap to reach the first implementation of a rig just to begin my trial. Sometimes the added momentum works in my favor, though, more often than not, the initial exertion significantly reduces my force production potential. So grip obstacles present a Catch-22 not just for me, but perhaps the sport in general. Thus, here we are presented with yet another question: Are failure rates inversely related to feelings of triumph in those who conquer? 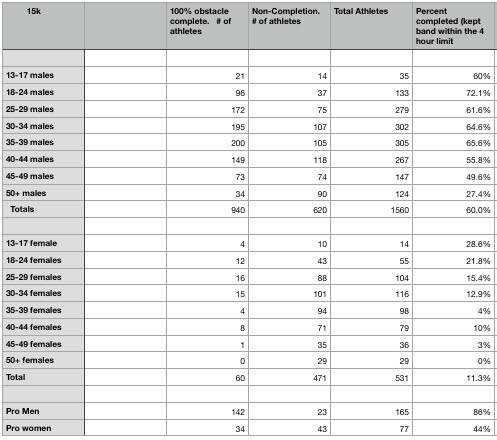 To bring this full circle, I’m torn when it comes to considering what the high rate of failure among females means in the progression of our sport. On one hand, if the rigs and other grip-intensive obstacles were to delineate lanes for men and women, it’s unrealistic for all race series to adhere to these standards; simply, the sport just isn't mature enough yet to require sex-specific lanes at multiple events worldwide when obstacles are often not permanent fixtures. Thus, if sex-specific lanes are not required at a qualifying event, a worldwide championship should not be required to do so either.

On the other hand, OCRWC, as it is named, is a worldwide championship event–it is essentially our sport's Super Bowl. OCRWC has racked up heavy-hitting accolades in the MRG Best of OCR Awards winning the popular vote in the Innovative Award and Best Event Award in 2016 and then Best Race Director, Best Championship Event and again with Best Event in 2017.  No matter the difficulty, it still seems OCRWC holds a dear place in the hearts of many a racer. It seems perhaps this event should be setting the obstacle standards for all OCR events, or at least those qualifying events. After all, as the sport grows and athletes long for it to be legitimized–with hopes of appearing in the Olympics one day–shouldn’t OCRWC take the reins not only in innovative obstacle design but sport-standard regulation? We don’t bat an eye when sports like baseball/softball and basketball adjust regulations to account for physical and physiological differences between the sexes, so why shouldn’t we expect that from our sport?

So what’s the answer? Is Tough Mudder onto something with the introduction of the “level up lane” in the 2019 Classic season, boasting “a range of difficulty options at select obstacles?” Honestly, I’m not sold either way. I see both sides of a compelling the argument of obstacle difficulty and standardization. What I do know is that the OCR community has the opportunity to influence change in the sport moving forward. Our sport is like an adolescent primed for peer pressure. So my call to this community is to use your voice. Start the conversation here by posting in the comments below with your ideas.

21shares
Disclaimer: The viewpoints expressed by the authors do not necessarily reflect the opinions, viewpoints and official policies of Mud Run Guide LLC, or their staff. The comments posted on this Website are solely the opinions of the posters.
By Hillary J. Greene|2018-10-31T10:20:38-04:00October 31st, 2018|Op-Ed|10 Comments