Goliathon is an obstacle course built especially for Indiana Jones.  Think the Last Crusade movie where our hero meets up with the ancient guardian of the Holy Grail.  “You must choose…wisely.”  That is the mantra of Goliathon. 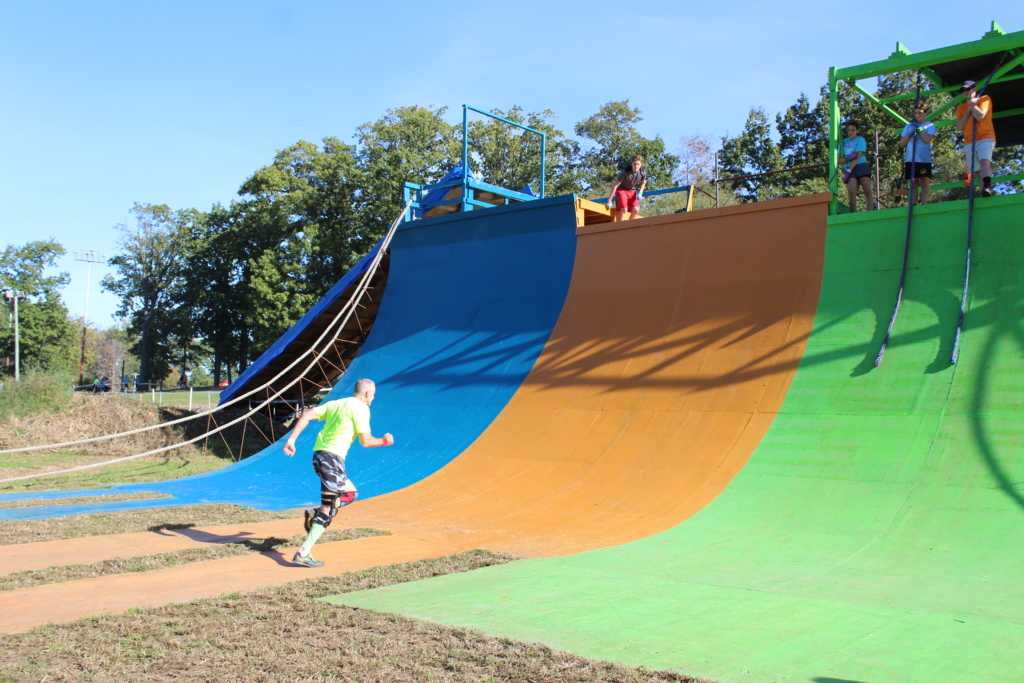 I chose G2 for Over the Moon and got shot down three times.

First, you must you choose the best obstacle to attempt.  At each station, the course offers three levels of difficulty, G1 for beginners, G2 for intermediates, and G3 for pros.  Each level offers an appropriate level of challenge.  You must decide before each attempt which way to go.  For instance, at the Skyclimb, I chose to climb a twenty-foot rope with a forty-pound chain around my neck.  Then at the top I had to grab that chain and use it to ring the bell at the top.  That was G3.  The G2 was a standard rope climb up and ring the bell with your hand.  I chose wisely.  G3 challenged me and I beat it.  Very cool twist on a rope climb. 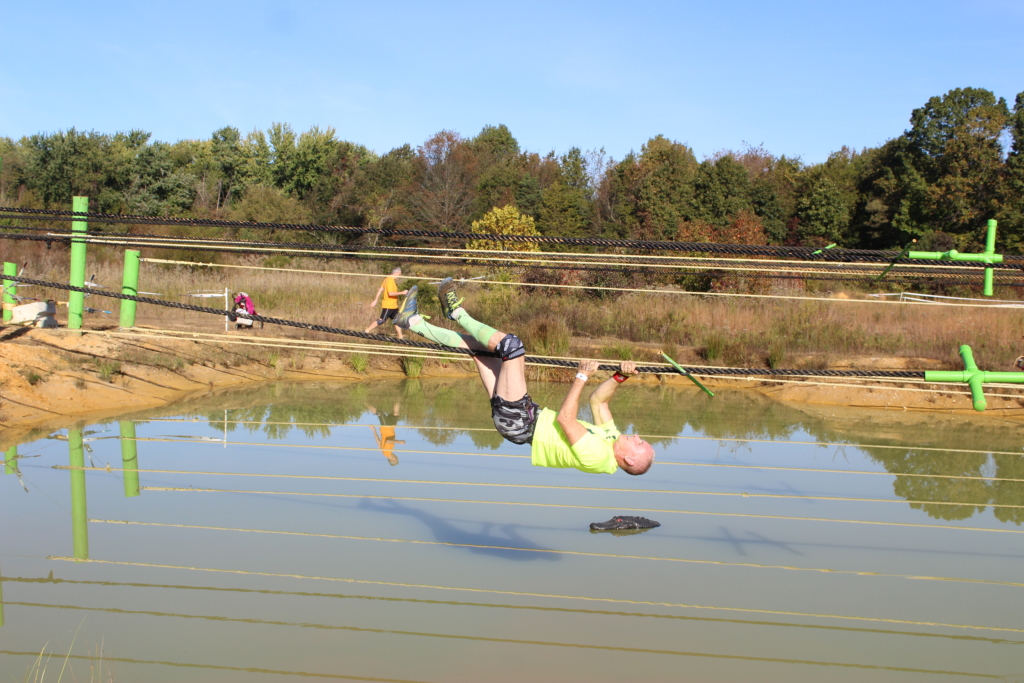 Watch out for the croc at Rope Cross

I chose a few other G3’s among the twelve obstacles on the course.  But mostly I picked G2’s.  Even there I failed four obstacles.  Failure may happen in a few ways:  You don’t complete the obstacle (fall off); you touch a yellow “off limits” section, or; you commit a false start.  In one case I chose a G1 because I wanted to protect my newly healed knee.  I decided that was a wise choice after watching one guy do G3 Leap of Faith.  These were floaties spread across a pond.  Think a frog leaping from pad to pad.  This man’s faith was strong.  He chose wisely.

Leap of Faith – Choose wisely if you have knee issues

Goliathon is located on an ideal course location, the 4-H Fairgrounds in Gloucester County, New Jersey.  Today was their eighth event over the past four years.  Goliathon has a few distinctions in OCR that set it apart from other races.  First, it is not timed.  Nevertheless, there is still a good four miles or so of terrain to cover.  The course was very well marked with all lanes taped off at hip level.  It covered a lot of technical single-track terrain.  It even had a monstrous hill climb much like Heartbreak Hill on the Skullbuster.  I loved that part a lot because they kept it hidden a month ago when I attended the Try the Obstacles Day.  I chose to run the event anyway.  This is the only non-timed race in the world where you can actually qualify for OCRWC.  Along those same lines of not being a race, Goliathon bills itself as a mission.  It’s a non-profit event where all net proceeds from today’s race go to building a well at an Ethiopian village to provide clean drinking water. 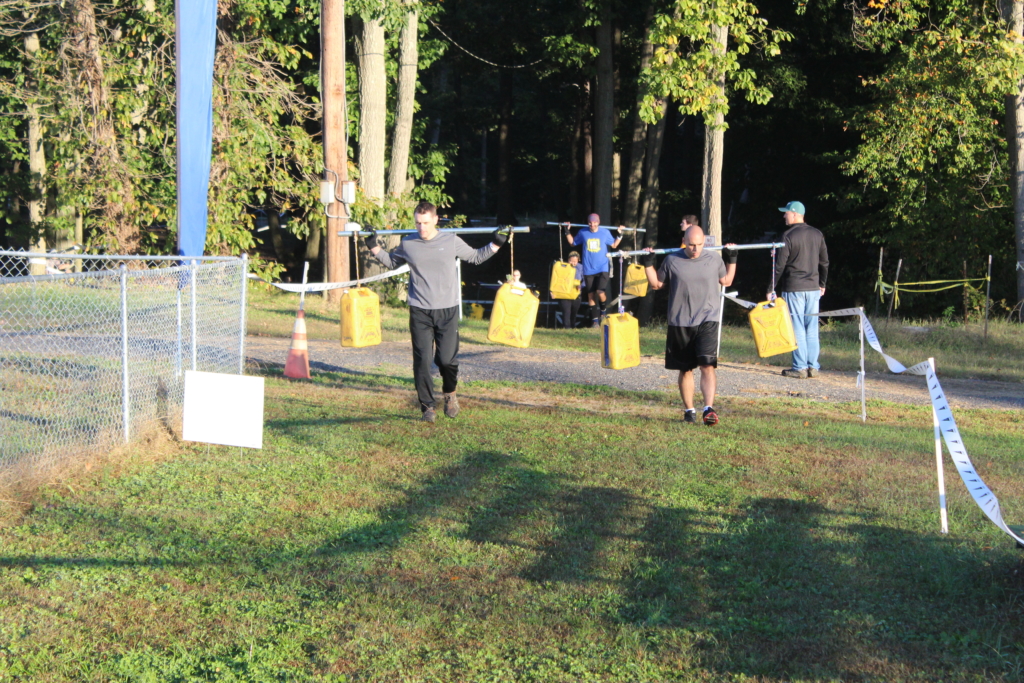 Water Carry reminds you that in Ethiopia, they must walk about five miles daily to get fresh water

Scores were recorded at each station by scanning a QR code on your wristband.  Pretty high-tech stuff that worked fairly well for its first time at this course.  Points were awarded at each station by receiving colored bands.  If you chose wisely and succeeded, you got a band of matching color for the obstacle you completed (G1 =  green, G2 = orange, G3 = blue).  Bands were still given out this time in addition to the scanning.

The caliber of athletes has improved over the years at OCR in general and Goliathon in particular.  Elites from the ANW world flock to this event.  Even obstacles like the Ninja Killer don’t slow them down.  So the possibility of a points tie for anyone who earned ten or more blue bands was decided by a very difficult post-event challenge.  A fifty-foot crane with a rope climb was the objective.  Fastest to the top and blast the horn was the tie-breaker.  What made this even harder was doing it soon after the next-to-last obstacle on the course, the 75-foot Rope Cross.  That’s a lot of traversing and climbing. 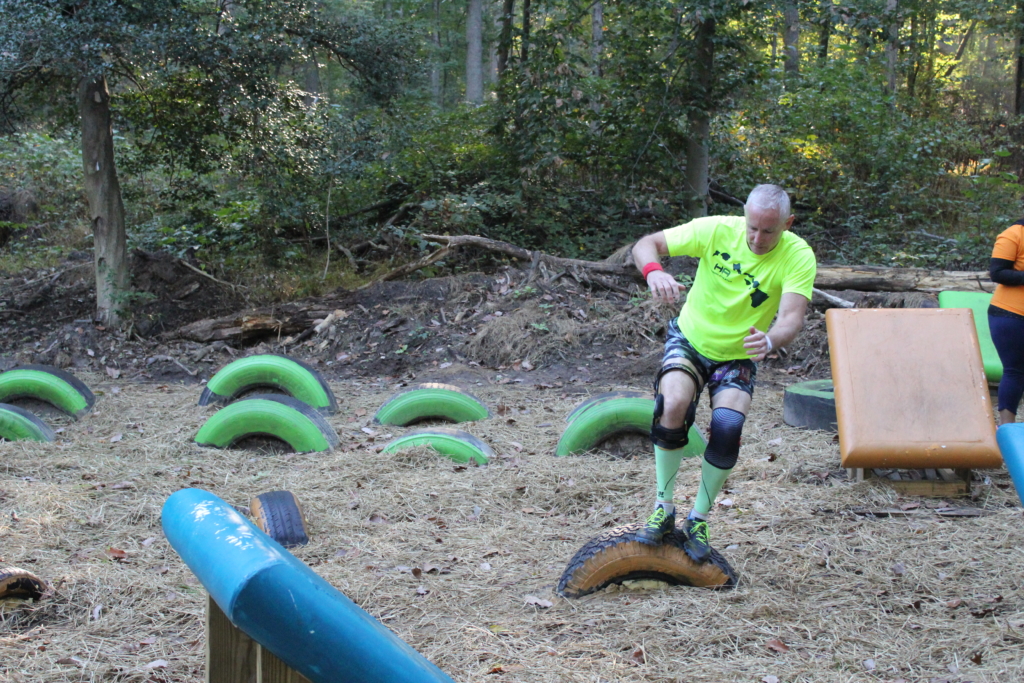 The Ninja Killer got me this time 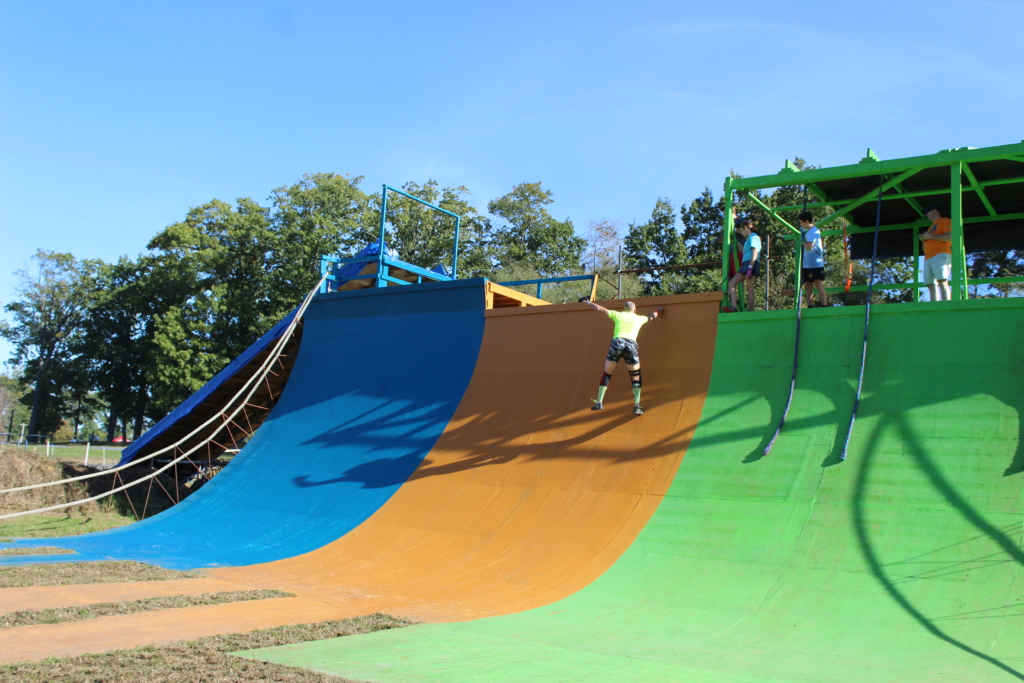 Over the Moon offers three attempts 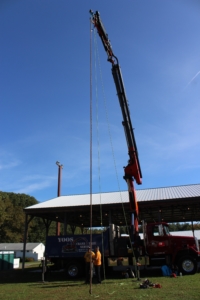 Seven athletes completed the challenge.  They set a new course record for the number of Davids in a single event.  Davids earned their blue bands at all twelve obstacles.  Earning the David distinction is no easy task.  Since its inception, only nine athletes have done it out of estimated 5000+ entrants.  One athlete, Jamie Rahn, has done it four times.  He earned his fifth yesterday.  I sense that Goliathon will do some course upgrades over the winter to make things tougher.  In fact, co-founder, Doug Horton, let me in on one of those secrets.  The fall event next year may also be an eight-hour endurance event.  This kind of OCR is rapidly gaining in popularity so it sounds like a wise move for the mighty Goliathon. 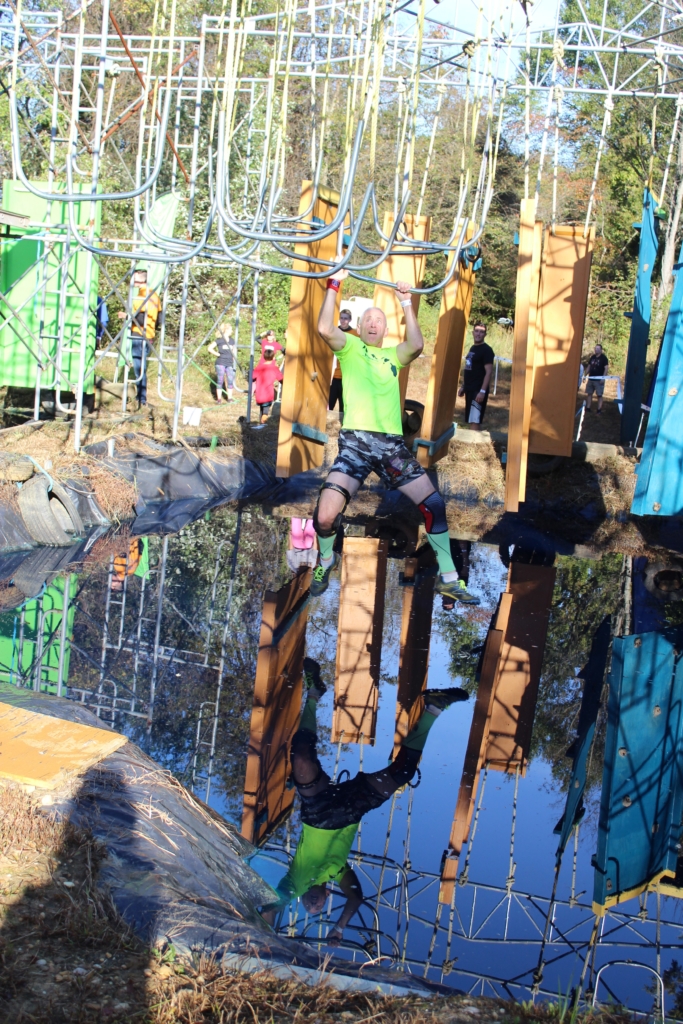 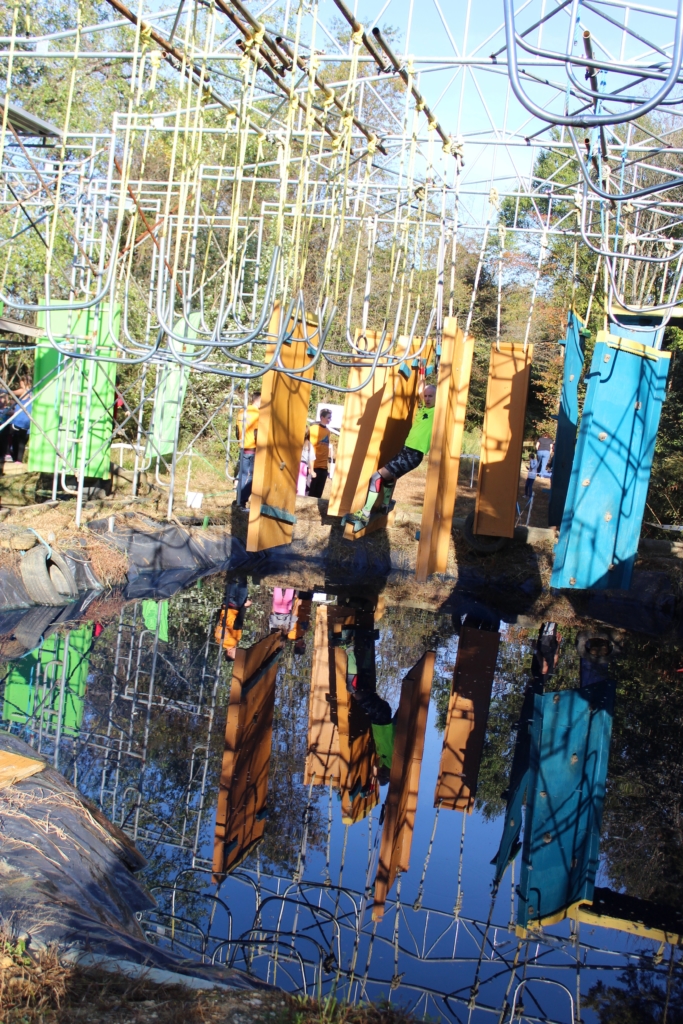 It's time for an OCRMudmaster infomercial.  I’m all about personal safety on the course.  It starts with technique training.  Mastery of obstacles is all about technique.  Goliathon offers a Try The Obstacles Day (TTOD) about a month prior to each event.  I strongly advise all participants to attend these sessions.  The course pros like Jedi Markowski are there to help teach you the techniques you need.  You can try the obstacles as many times as you like.  But remember, on game day, it’s no try, only do.  And if you fail, here is my other personal safety issue – you better know how to fall safely.  I saw one girl faceplant on Circus Maximus.  I fell off too and executed a perfect roll out.  Thanks to course obstacle designer Ty Hagy for acknowledging my technique on an epic fail.  Finally, I mention Jedi and Ty among the probably hundreds of others, all volunteers who made safety and fun the top features of Goliathon.  There were at least six volunteers at every obstacle.  These guys know how to recruit.

Let’s talk about infrastructure for a moment.  The largest team earned a courtesy area beneath a show barn.  That distinction was won by Team Blood, Sweat, and Beers.  They also won this nice trophy.  The volunteers had their own show barn across the venue.  It was well stocked with nourishment, seating, and supplies.  Also around the periphery were two very nice, clean male and female changing tents, a lineup of very clean and spacious porta-potties (no lines!), vendor tents including V1ktor Athletics, Evolution Fitness and Tree Awareness (who sponsored our tie-breaking rope climb), and of course the Registration tent.  A large photo-op wall greeted athletes as they approached the starting corral. The photo-op wall. It's a Mission. 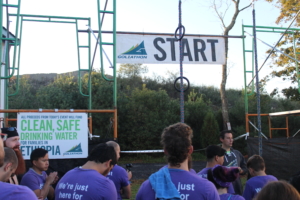 Doug warms up the next corral 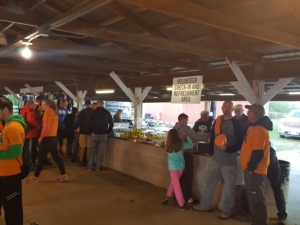 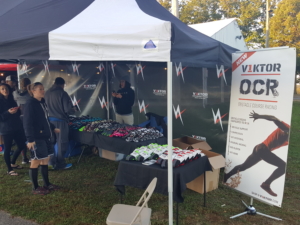 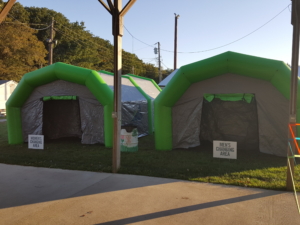 T-shirts at the finish line tent 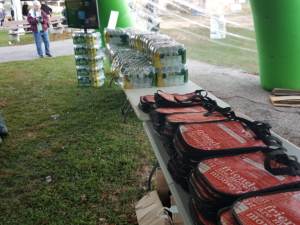 Finish tent with water, bananas, and goodie bag from Lululemon The leap of joy at the finish line 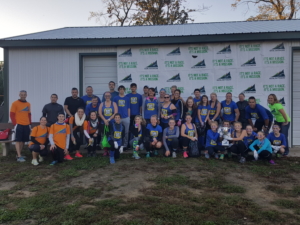 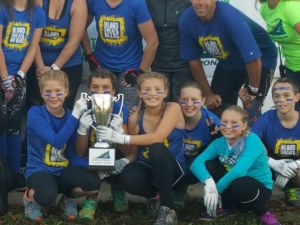 One of the highlights of my day was seeing my good buddy Bob Mulholland.  He is Mr. OCR when it comes to course photography.  Joined by my other friend Brian Motzenberger, these two have been shooting Goliathon since day one.  They are highly decorated photographers and it is always a pleasure to engage them on the course.  Bob and I had a nice conversation as I traversed the rope.  The last time he shot me on a rope was at ABF Mud Run many years ago.  This time I did not fall off despite his many good-natured taunts.  He, my wife, and I had a nice short reunion after I completed the G3, then I was off to the final obstacle of the day, Over the Moon. Fellow MRG contributor SBuchwalter encouraged us last week, Don’t Sleep on Local Events.  Goliathon is one that deserves the full support of the OCR community.  It has a mission, excellent obstacles, first-class volunteers, outstanding venue and location, and a 5/5 rating from the OCRMudmaster.  Goliathon is your wisest choice.