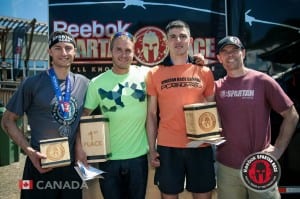 Monday morning the internet was buzzing with the what some have dubbed Shirtgate 2.0 (we're fond of “Shirtstorm at Spartan”). The controversy comes after a podium photo posted online from the Reebok Spartan Race in Montreal featured the elite men posing with founder Joe De Sena. In the photo the male winner, BattleFrog Pro Team athlete, Ryan Atkins shirt was been altered to coverup the BattleFrog logo. This PhotoShop has caused the photo to go viral, outrage from many in the industry, and this morning BattleFrog put out the photo with the Spartan logo photoshopped and the BattleFrog logo restored.

Many in the industry are attacking the Spartan Race founder Joe De Sena personally for the coverup… as if he's the one doctoring the photos.  We reached out to find out more about this developing story. The truth comes down to business and sponsorships. After a phone call with De Sena himself along with emails from his executive team at Spartan Race the official statement on clothing on the podium is:

“Spartan Race participants are free to wear whatever they want throughout the event, including the podium. We ask that the podium finishers also take a photo with our tees to promote the road to the world championships, optional on their part.”

“If images are edited and how completely depends on the intended use for the imagery – partner promotion, advertising, media, etc. As it relates to “competitor” logos, at times we have promoted competitors logos and at others we have selected another shot. We do not have a policy of blurring competitor logos.” 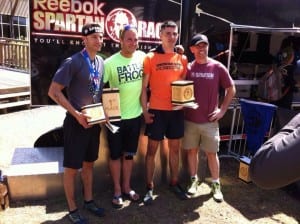 A Tale of Two Photos:

While this year at Spartan Race the policy has varied from race to race, moving forward it appears all races will have two podium shots:

What we see on social media will be up to the company to decide.

As the writer SOLO mentioned in an article earlier this spring regarding the first shirt incident with Spartan Race. This is not the first sport that has required athletes to conform to an apparel sponsor. Much uproar was written last year regarding the CrossFit Games requiring all athletes to wear Reebok only branded apparel, shoes and more. At the end of the day these companies are businesses and being a business comes first.

It seems reasonable for companies to want their race podium to reflect their  “road to the Spartan World Championship reflecting Reebok and NBC logos”. It would seem appropriate much like CrossFit does with their regional competitions to have a special podium shirt for athletes that reflects this “road to the world championships”. When it comes down to it Shirtgate 2.0 is nothing more than business being business and sometimes the athletes get caught in the middle.