Since Warrior Dash runs races about every other weekend, I hold them to a higher standard.  As an established race series with so many events nationwide, Warrior Dash should have most of their problems fixed through trial and error.  Chances are if you are reading this, you have done at least one Warrior Dash before, so I will spare some of the details normally associated with a race review instead focusing on aspects specific to the Illinois race, planned for both Saturday and Sunday.  Of note, I ran in the competitive wave, so my comments reflect the experience around the first half of Saturday’s race. 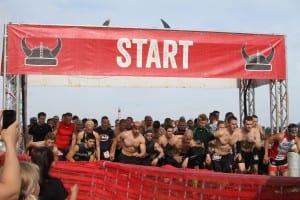 While the parking lot had plenty of space, the ground was very muddy.  Understanding that the race director cannot control nature, I judge Warrior Dash by how they handled the situation.  They had numerous trucks and bobcat vehicles standing by to pull cars out of the mud.  From what I saw, it was very efficient considering the situation.  Some of the people I heard complaining about the service they received were the same ones that were pulled from the mud, only to be stuck 10 seconds later due to the same driving errors (driving through more visible mud, stomping on the gas, etc.).  Overall, the days of rain preceding the event made the conditions bad but they did a good job responding efficiently.

I signed up for the competitive Warrior Dash Illinois for both days using my season pass.  The email I received confirming my registration said my start time was 8:30.  The website said the competitive wave started at 8:30.  As an athlete who likes to warm up, I showed up just before 7:30 to check in and get ready.  At 7:55, the announcer was urging people to get to the start line.  I slowly jogged over there and lined up only to hear that they were about to start.  Apparently, the competitive wave was at 8:00.  Had I not been warming up, I would have missed it.  At 8:00, we began the countdown to start only to be told to stand by.  The actual wave started at around 8:20, so late if you knew the competitive wave was at 8:00 or early if you thought it started at 8:30.

Worst of all, one of my friends planned to use the race to qualify for the Warrior Dash World Championships.  He was told by someone at the start that both the 8:00 and 8:30 waves would be competitive waves due to the large number of people.  After running in the 830 wave, he crossed the line in 3rd only to realize that not only would he not win an award but his run made him ineligible for the World Championship.  His solution was to run again on Sunday, which would have been okay Sunday would have been run as planned.

Warrior Dash is not known for great obstacles and this race was no different.  Going into the race, I knew the obstacles would not be very hard, so I was not disappointed.  Although, if you have not done a Warrior Dash this year, I do believe they are making better obstacles.  Previous years, I felt like they just threw garbage on the course and called it an obstacle (old tires, piles of mud, old cars).  At least in 2015, there are clear obstacles that require climbing and some degree of athleticism.  They are still not hard enough to slow pure runners or cause people to fail but they are definitely better than previous years. 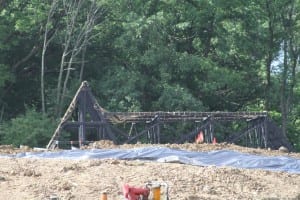 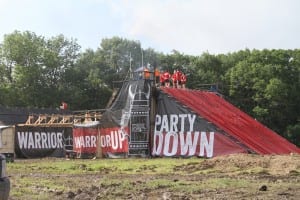 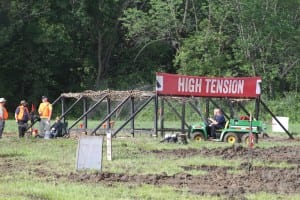 Around mile 2, I entered a creek and saw course tape lying in the middle of the creek.  Was this a boundary that had fallen off the side of the course or was it marking turn/boundary?  Luckily, I could see the racer in front of me and just followed him along the course.  I assume he went the right way since we eventually hit another obstacle but there was definitely a period of uncertainty.  I heard some of the racers behind me say they wasted time standing in the creek confused, which has a devastating effect in a short race like a 5k.  Overall, the course was clearly marked minus that one section in the creek, which also had no volunteers anywhere in sight.

Finally, a race fixed the post race line at the shower station.  Through their sponsor Delta, the shower faucet company, they had the best post race shower I have seen.  It was essentially a trailer loaded with around 50 shower heads all on high blast with moderate temperature water.  I am not sure if a line formed eventually but it looked like it was capable of handling the massive number of racers at the event. 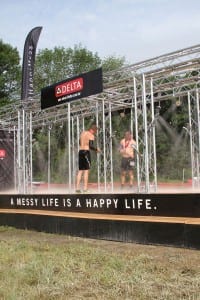 Warrior Dash did a great job with the Awards Ceremony by starting it a little over an hour after the first place finisher.  A pet peeve of mine is waiting all day for an awards ceremony that takes five minutes.  They did their ceremony in a timely manner with minimal confusion.  They even called the awardees names ahead of time to make sure they were in the area prior to the ceremony starting.  Definitely one of the better run award ceremonies I have seen. 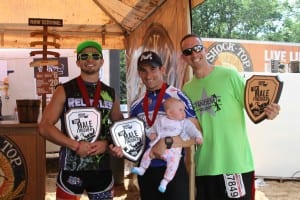 Race directors cannot control the weather and that was evident on Sunday.  The parking lot was bad enough on Saturday afternoon, Warrior Dash stopped letting people park their car.   My only complaint is they canceled it an hour before the start of the competitive wave.  The situation had not changed much between sunup and canceling.  An earlier cancellation would have allowed those from driving the option to stay home.  However, they have to balance this with not canceling the event unless they know it cannot go on.  Overall, they handled Sunday about as well as they could have.  They canceled before the first wave, they had an alternate parking lot planned and they offered free entry into another race for those that paid for entry.  They cannot control all the variables but they can control with how they deal with customers when they do not deliver on their product, which I think they did well.

Have you done a Warrior Dash? Share and Rate Your Experience…