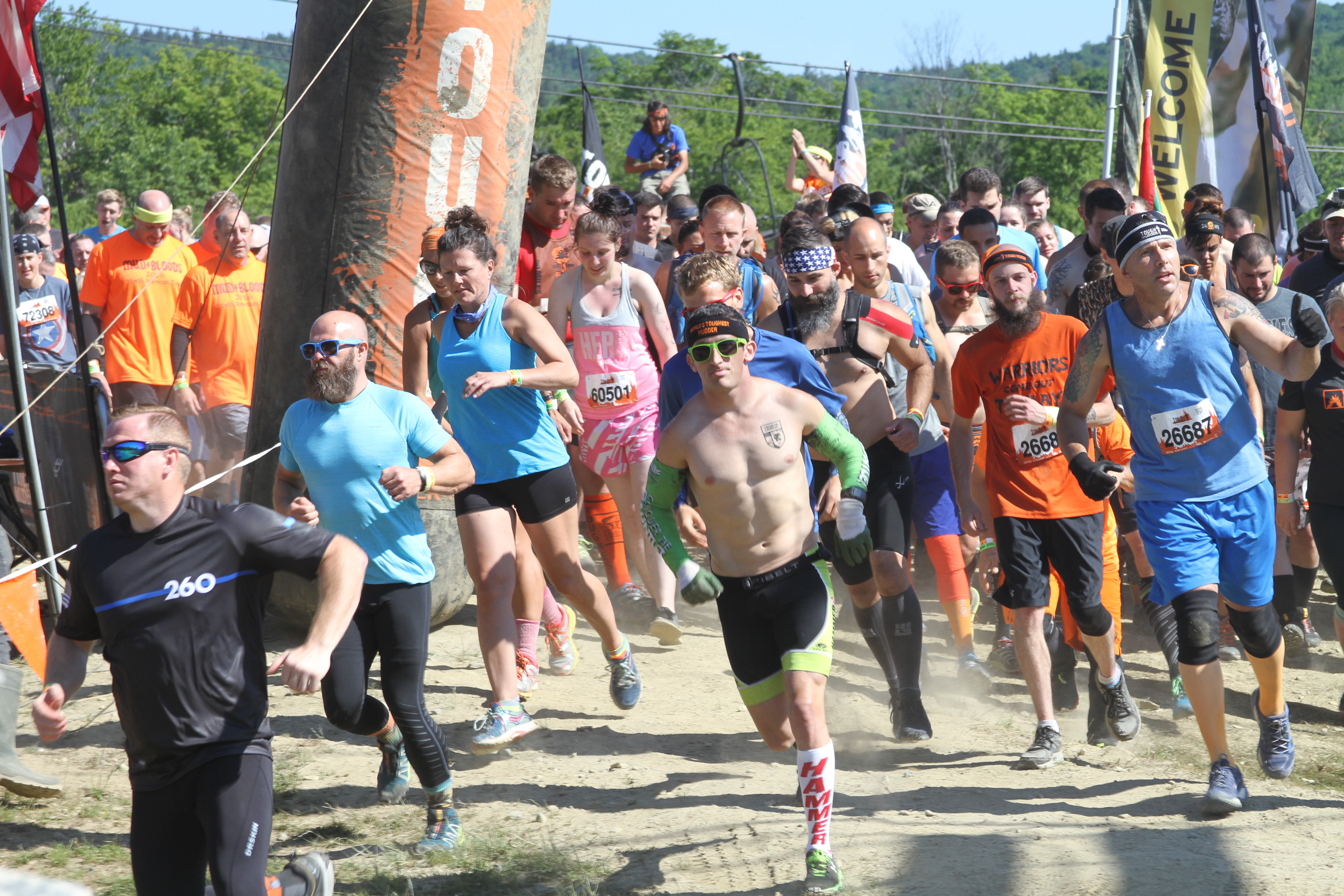 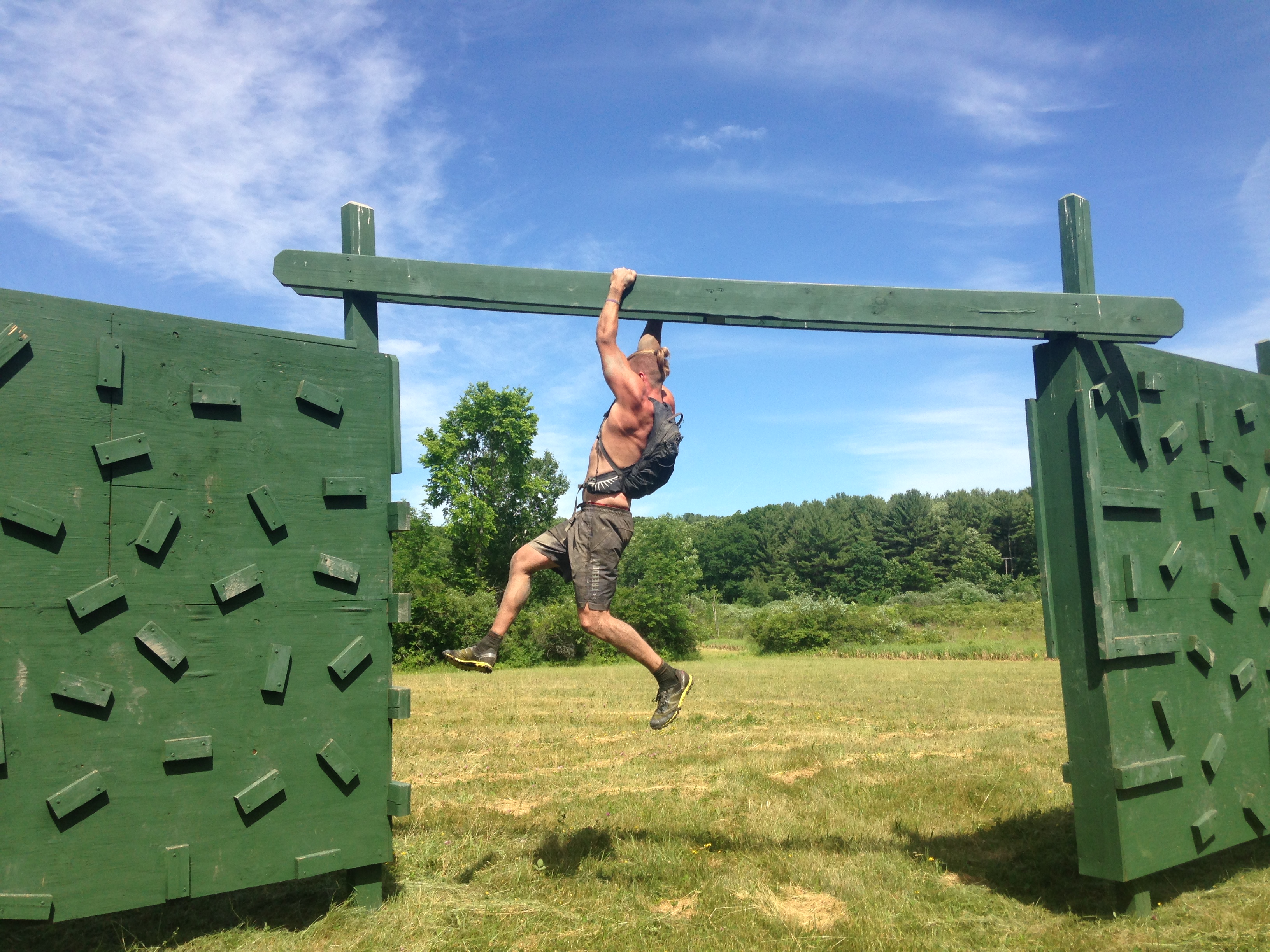 Neil Cary completing the traverse wall during one of his laps at Day 3: Viking OCR. He would complete 36 miles over two days.

161 miles, 1000+ obstacles and 31,000+ feet of elevation gain. Spanning venues from Vermont to Oklahoma, multi-lapping for seven days in a row is how I spent the last week of my life. The event was Obstacle Course Race (OCR) America and was designed with three goals in mind. The first was to raise money for the charity Folds of Honor, which provides scholarship money to children whose parents were wounded or killed in US military action. The second was to raise awareness about OCR, specifically that it is bigger than the major brands everyone is familiar with. Finally, the last goal was to create a personal challenge that pushes me to my limits (and possibly beyond). 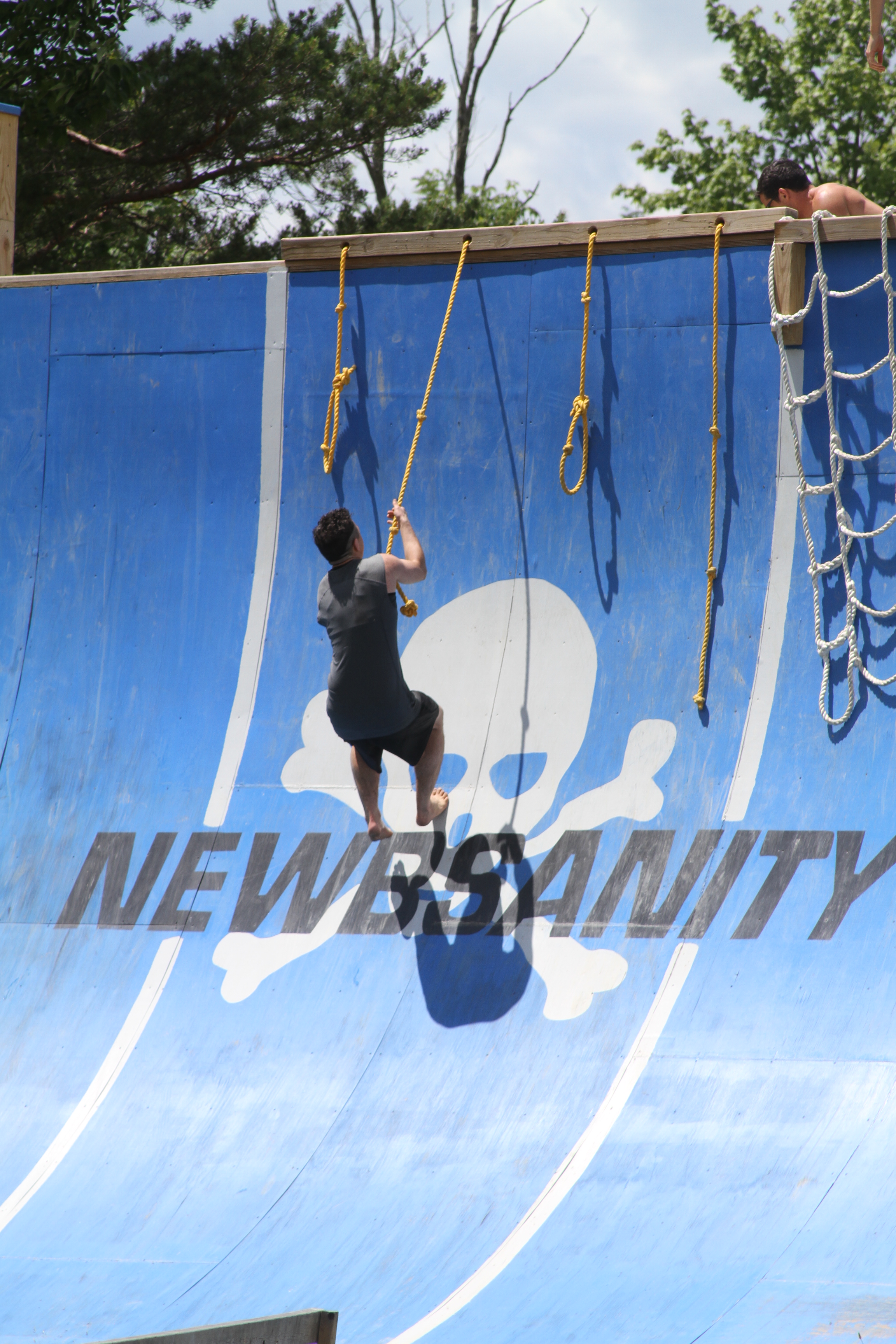 From 19-25 June, I multi-lapped two “live” races (Tough Mudder New England and Conquer The Gauntlet Oklahoma City) along with five permanent OCR venues (Shale Hill, Viking Obstacle Race, Newbsanity Mud Gauntlet, Newbsanity Extreme Ravine and Dirt Runner) in an effort to run about an average of a marathon each day.   These courses generously allowed the use of their facilities for essentially no cost in support of a great charity. OCR America, as initially conceived, was 10 days long hitting every permanent facility in the US. However, when I subtracted those wanting to charge thousands of dollars for use or ones that had conflicting events, the seven-day OCR America is what I was left with. I can’t say enough good things about these facilities, their owners and their love of OCR. If you have not been to the permanent sites in Vermont, New York or Illinois it is time to schedule a trip for this year or next year. They offer an experience unlike any other.  Furthermore, the two traveling series (Tough Mudder and Conquer The Gauntlet) also loosened some of their rules to allow for this event to occur as conceived.

The initial goal was to do about a marathon each day (26.2 miles). While the goal seemed very achievable when I created it, I based it primarily off other permanent OCR venues I had visited, which were mostly flat and had few challenging obstacles. After arriving at each venue I quickly learned that I had underestimated the difficulty of the courses. As a comparison, multi-lapping at World’s Toughest Mudder is not bad because the course is designed for repeated laps.  Multi-lapping at a regular Tough Mudder is also not bad because they only have about 30 obstacles spread out over 10-12 miles.  However, multi-lapping at a single lap venue that is built and designed to pack in challenging obstacles to attract participants is a different story. 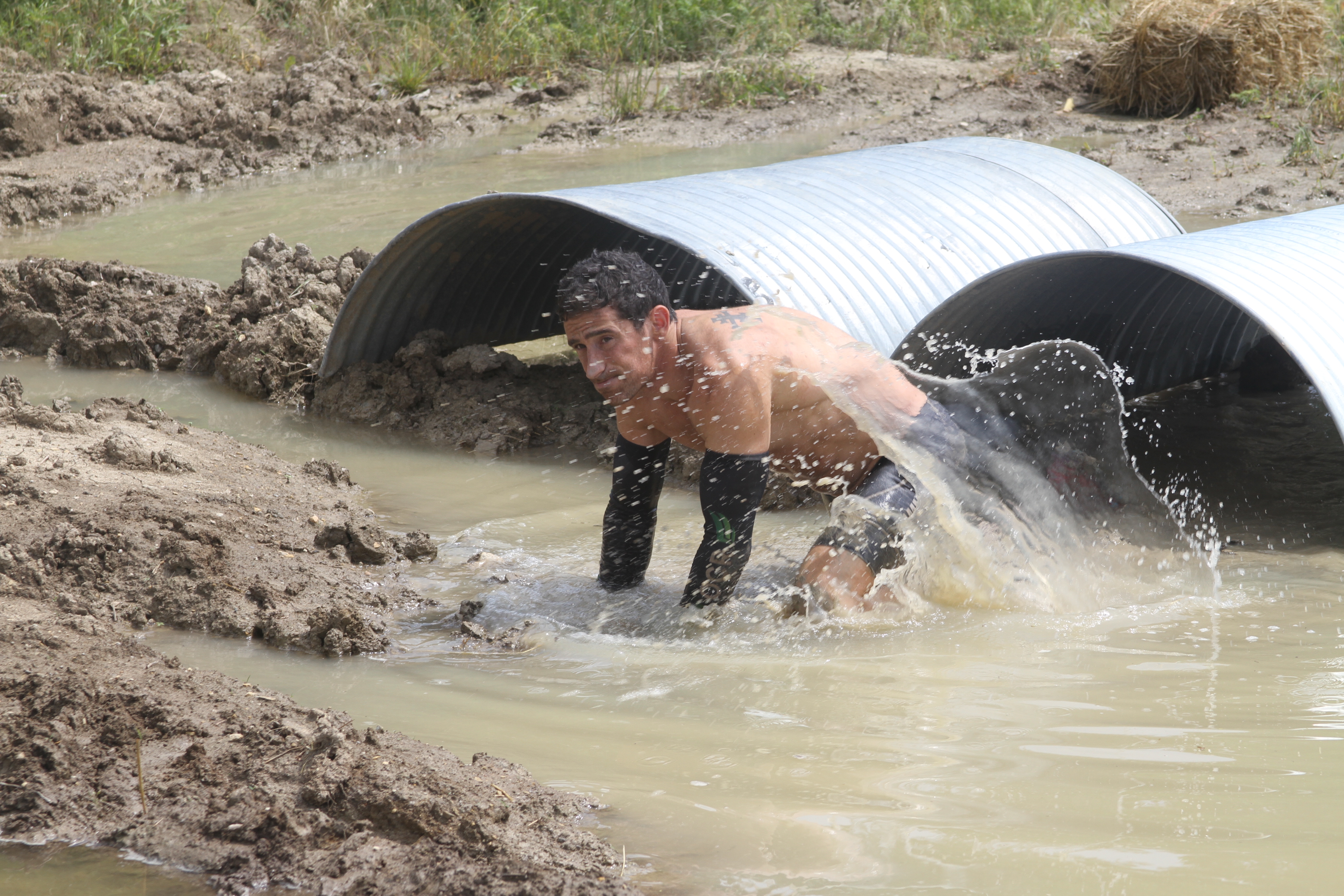 Evan emerges from a tunnel at Dirt Runner located near Chicago, IL on Day 6 of OCR America.

After the first three days I was on track having finished 21 miles at Tough Mudder New England (before the course closed), running 25 miles at Shale Hill (the hardest OCR in America) and 33 miles at Viking Obstacle Race. The first two days were brutal with long periods spent in the sun and a cumulative 13,000+ feet of climbing between the two days. Add in Shale Hill which has the hardest set of obstacles in the US and it was very rough on the body. You are probably thinking Viking must have been easy but it was harder and more technical than any series race I have run minus some BattleFrog events and all the Conquer The Gauntlet events (Spartans are hard in a sense they require a lot of effort but typically don’t have obstacle I would normally fail…minus the spear throw).  The Viking course had hard obstacles including varied monkey bars (flat, uphill, downhill, flat sections), rope climb, caving ladder climb, two free hanging rope descents, lots of walls and several climbing obstacles which were definitely fail-able. 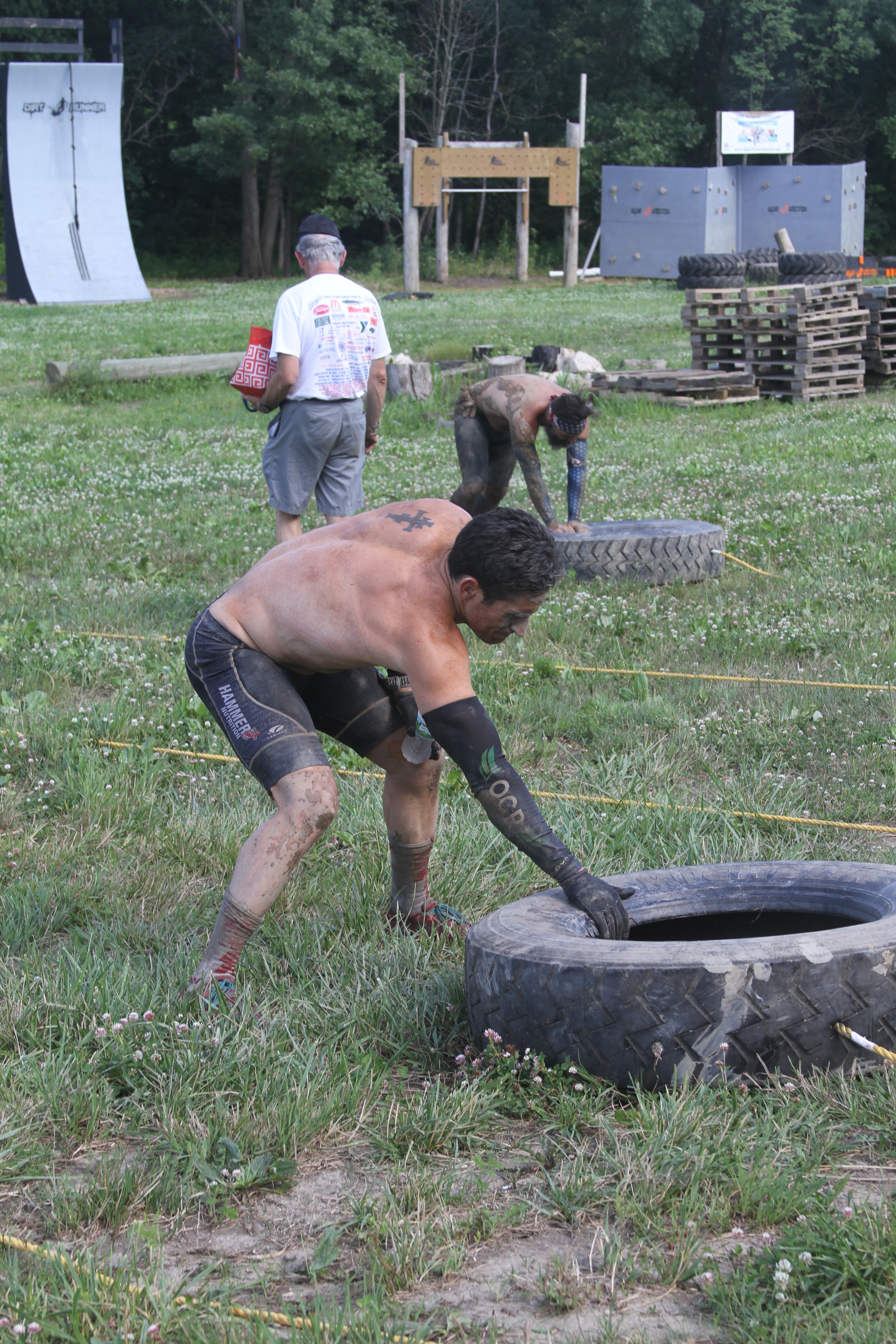 Evan and Demetrios “Sty” Karellas pulling the tire drag back to its starting position at Day 6 at Dirt Runner.

By Day 4, I knew my mileage goal would be tough to reach not because my body was physically incapable of covering the distance and obstacles, but simply because I would run out of time. Day 4 had a noon start time which means I would be racing the sun for completion.  Then the following days, Days 5 and 6, both required a 12-hour drive post-event meaning I had to be off the course by around four or five PM.  Finally, Day 7 was another “live” event, meaning I would be at the will of the normal hours of the event. I decided to continue to move towards my goal covering the most mileage I could in the allotted time (about 8-9 hours per day).  Even though my mileage going to look a little lower, the big three goals of raising money for scholarships, spreading the word of these permanent facilities and creating a hard personal challenge were still on track.

Day 4 at Newbsanity Mud Gauntlet was awesome with the largest crowd of the week with over 20 participants. I got to run with a different person every lap and learned a ton about the community Jarrett Newby and his father built around their course. Day 5 was also at Newbsanity but in their Extreme Ravine course, with 850 feet of elevation gain every three miles it was mostly natural obstacles but had several man-made ones included.

After a 12 hour drive from Binghamton, NY to Marseilles, IL I arrived at Dirt Runner. The Dirt Runner course is a Spartan inspired course that occurs just outside of Chicago (same site as BattleFrog Chicago). The course was setup for their sprint event DRX Dash so I spent much of the day trekking over the most technical terrain of the week with the occasional man-made obstacle only to exit into a field with 25 obstacles over a 350m stretch. The Tarzan Swing was easily my favorite of that event and made me feel like I was in a pirate movie or the set of Goonies swinging from a giant rope swing (videos can be seen on my Facebook page from June 24th). 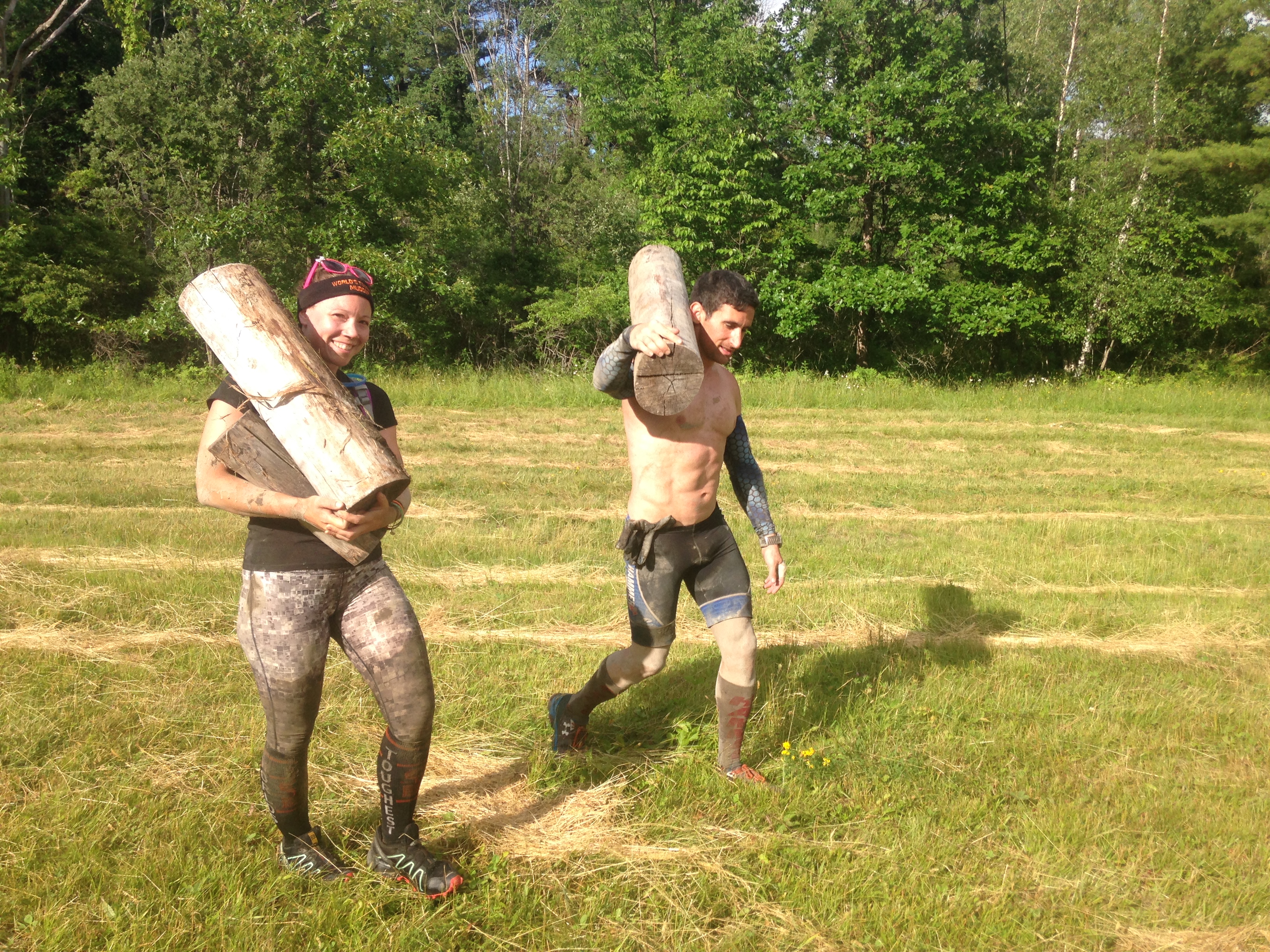 Another 12-hour drive later and I arrived at Conquer The Gauntlet (CTG) Oklahoma City. Thankful we made it through a second night of all night driving safely, it was time to go to work. CTG OKC was a fitting ending for such an epic event. The CTG crowd was so great and supportive, encouraging me on every lap. I had Tracy Jost and Lucas Pfannenstiel on the microphone cheering me as I passed through the finishing/starting chute.

The grand finale was when all present members of the CTG Pro Team plus friends came out for a final lap. My even 1 hr 30 min laps, suddenly slowed way down as we made our way through the course like a traveling OCR party. Facebook live streaming of the event commenced as athletes carried an 60 lbs. sandbag and a giant log through the course. We did walk away with some epic videos of that final lap, which are available on my Facebook page and are awesome. Eventually, Nathan Palmer, Demetrios “Sty” Karellas and I, ran the final two miles alone completing my OCR America journey. 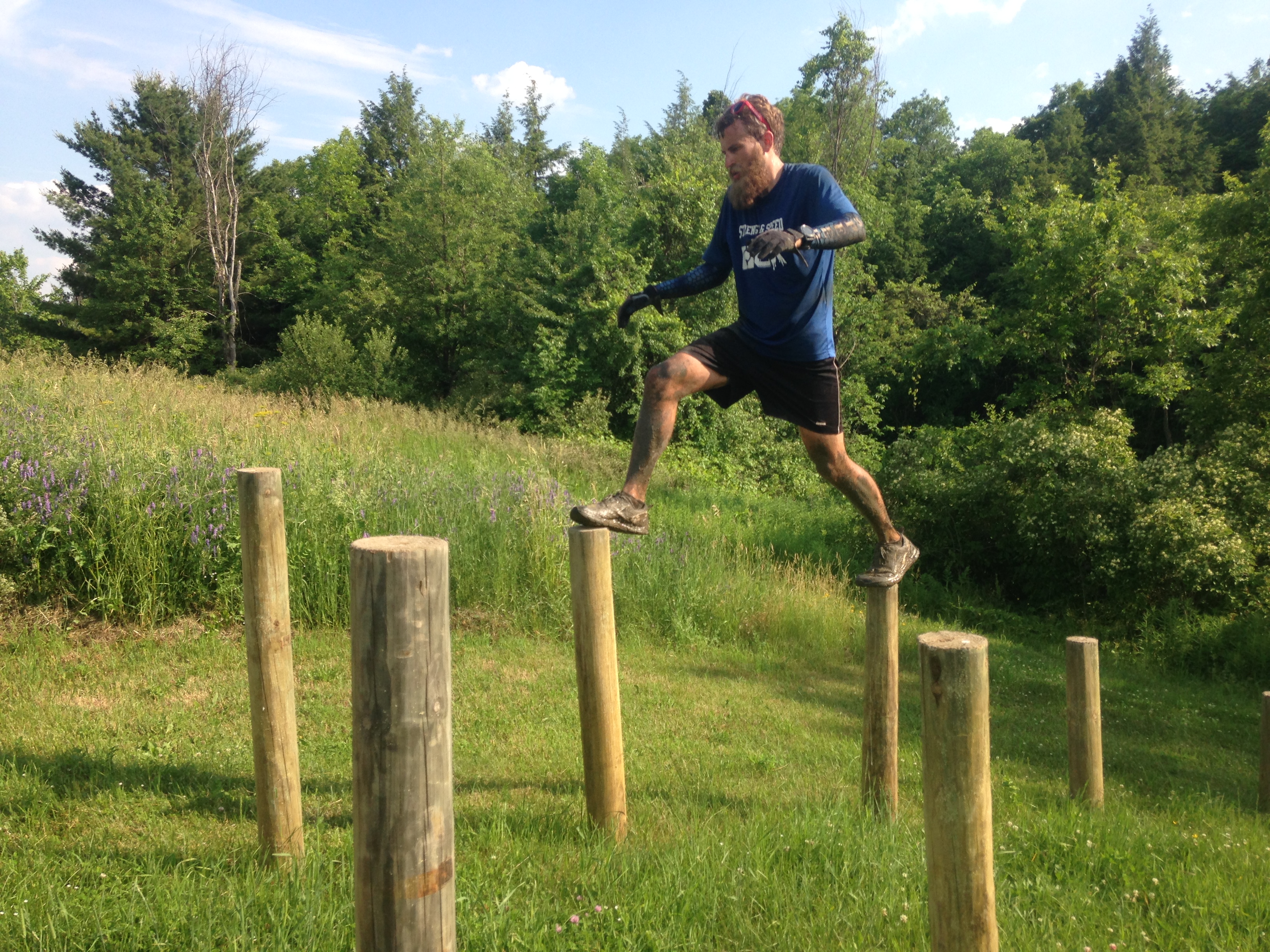 Jordan Smith was a crucial pacer during the event, here he is at Day 2 Shale Hill. He ran a total of 60 miles over four days of OCR.

I ended up averaging 23 miles a day with an insane total of 31,000+ feet of elevation gain over the week (higher than Everest’s 29,029 feet…but who is counting) and over 1,000 obstacles. The charity page for donation to Folds of Honor is still open if you want to show your support for all the work I did. Between local media coverage, the daily updates on Overcome and Run Podcast, Facebook updates, family, friends and the trickle down of people telling acquaintances about the event I hope I spread the word that OCR is larger than the big three, but that is hard to measure. Finally, I definitely was challenged both physically and mentally. The difficulties that arise from simultaneously organizing, running and then competing in an event was something else. My muscles were still capable of moving me forward even after a week but the outside of my body covered in bruises, scrapes and ripped off calluses on my hands was in rough shape. The hardest part of everyday was waking up in the morning knowing I had 8-10 hours of running, walking and climbing ahead of me. It took a special kind of willpower to get out of bed every morning for what was essentially seven straight days of BFX events. 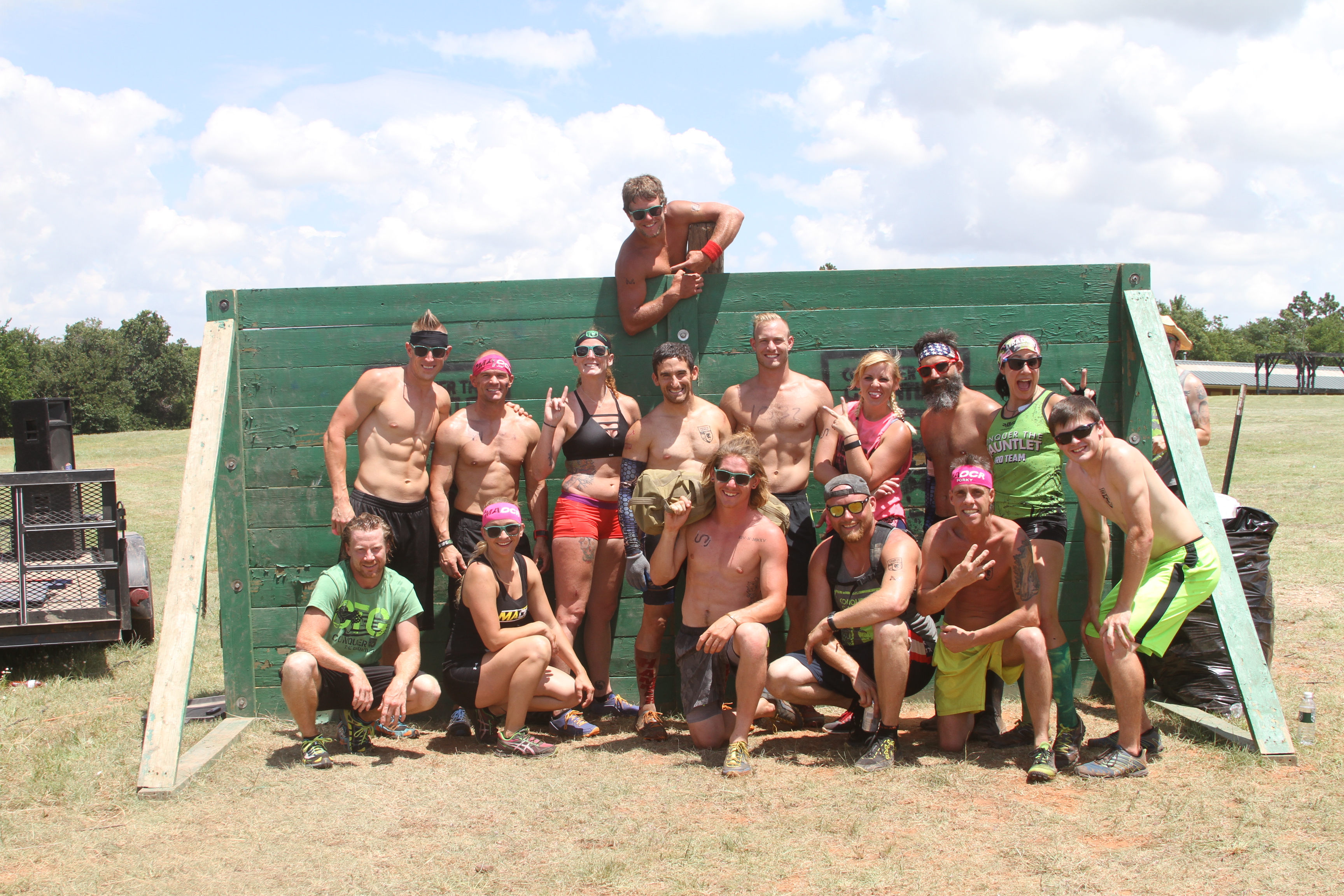 The Conquer The Gauntlet Pro Team and friends join Evan for the final 4 miles of OCR America at CTG OKC.

OCR America as it is designed in 2016 is a one time event for me. However, if you know me personally, you know I am always thinking a couple of steps ahead. I guess we will just have to wait to see what I have in store for the future.  #OCRAmerica

-Please take a moment to donate to Folds of Honor, even if it is just a couple of dollars.

-This event would not have been possible without my pit crew (my dad, my wife, my baby and Demetrios “Sty” Karellas). Sty did more than his share by not only driving the majority of the trip but by covering a total of 61 miles over the seven days often running with me when no one else was on the course.

-All pictures are from Amy Perperis and Sty of Strength & Speed

-For in depth day by day breakdown check the OCR America main page, which also has links to the Overcome and Run podcast if you prefer to listen:

-Thank you to all the sponsors that supported OCR America and continue to support OCR in general.  If you are going to spend your money for training products, supplements or clothing, stick with ones that give back to our community: 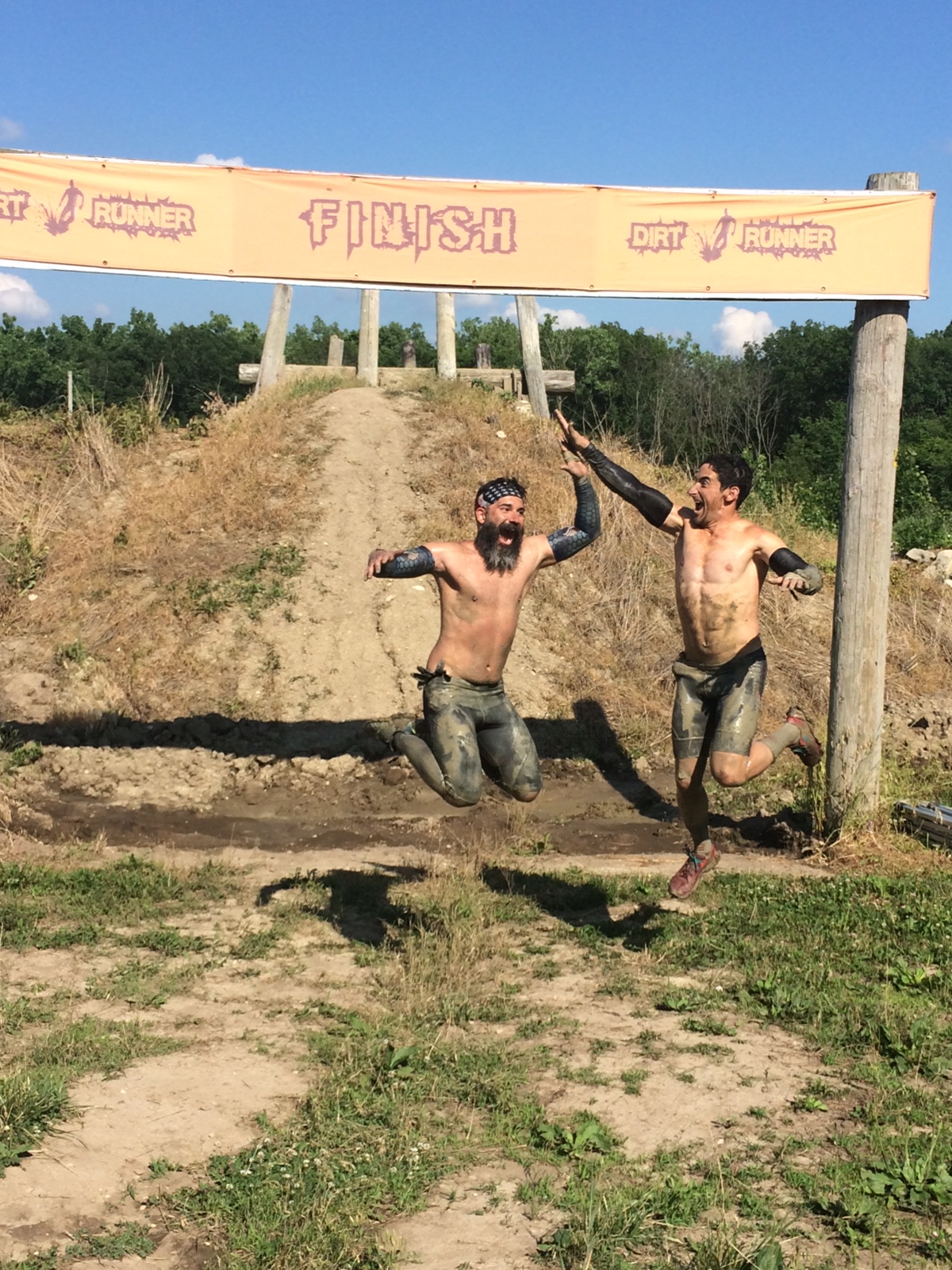 Sty and Evan high five at the end of Day 6. This event would not have been possible without him pacing Evan for 1/3 of all miles and driving almost the entire route.  Also…..first and only try for this picture.